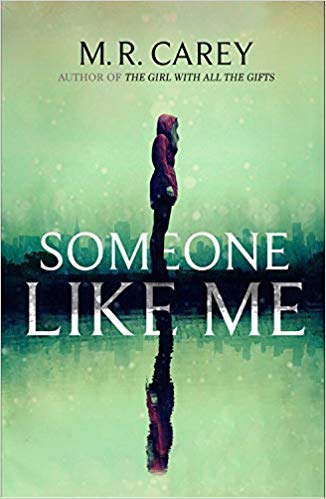 After fending off a brutal attack by her ex-husband, a woman fears for her sanity. The truth is something far more terrifying.

What The Reviewers Say
Rave Paul Di Filippo,
The Washington Post
... Someone Like Me, is a spooky, wrenching, exhilarating ghost story-cum-thriller that manages to put a fresh, almost science-fictional spin on its specters and spooks. It’s domestic in scope — no global armageddons or apocalypses here, no burning cities or plague-ridden communities — but still delivers the maximum freight of frights and consequences ... Having constructed this very sturdy stage for his supernatural action, Carey does not stint with the unpredictable chills and an implacable, unstoppable cascade of events leading to his climax — all of which is made sharper by juxtaposition with the drab and quotidian venue, a very solidly rendered Pittsburgh. Along the way there are many moments of tenderness and humor, leavened with pop culture riffs ... In the end, Carey’s novel joins the accomplished ranks of Paul Tremblay’s A Head Full of Ghosts and Tim Powers’s Alternate Routes as a 21st-century rethinking of the eternal nature of ghosts.
Read Full Review >>
Mixed Alice Gunther,
Bookpage
...Carey explores a subtler infestation in Someone Like Me, juxtaposing two troubled women whose coping mechanisms have taken on lives of their own ... At its bloodiest and most baleful, Someone Like Me can’t quite work up the Gone Girl level of feminist shock it aims for...but its human-focused horror should be a draw for the Stranger Things crowd ... Someone Like Me plumbs familiar horror premises to find a few new ingredients for the old Hyde formula.
Read Full Review >>
Positive Mahvesh Murad,
tor.com
All four [central characters] are unique identities, all four share traumas and overlapping lives through time and space—or do they? Are they each simply an aspect of the others’ own personality, subconscious? One an id to the other’s ego? Carey is good at making his readers question this, with plenty of well timed reveals adding to the constant tension in this twisty yet controlled narrative ... But this isn’t just a thriller—it’s also a sensitive and smart commentary on domestic abuse and it’s traumatic aftermath ... Carey is clever, and so he leaves the answers to his readers.
Read Full Review >>
See All Reviews >>
SIMILAR BOOKS
Fiction