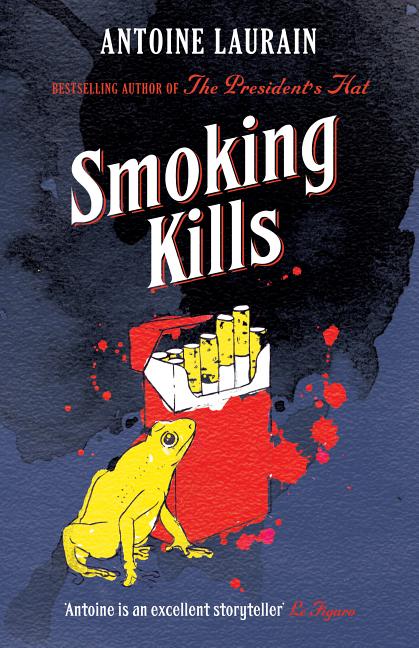 In this dark comedy, a Frenchman tries to quit smoking through hypnosis, which has the unpredictable effect of sparking a new addiction—to murder.
Rave
Based on 4 reviews

What The Reviewers Say
Rave Andrea Tallarita,
PopMatters
The essence here is not the investigation, but the murky reasons behind the crimes, and these reasons are at once nostalgic and satirical, romantic and cynical. The plot has a touch of the surreal about it ... Smoking Kills won't satisfy you if you're looking for a fast-paced crime novel, but it works—and impressively well—in all other respects: the writing here is light, distinctive and drenched with irony. The narrator's laconic and sometimes downright insulting comments on everything that surrounds him make for a cynical joy to read ... The book's constant interplay between themes of personal and social freedom is not just delightful, it's also distinctly adult and unassuming ... factoring in one of the most savage, most gloriously satisfying endings I've read in ages, I can't help but recommend this book for what it is: a gem.
Read Full Review >>
Positive Catherine Turnbull,
Crime Fiction Lover
The obsession of the deeply-addicted is well-drawn, with Fabrice’s dependency influencing every facet of his adult life as he rants about the injustice of the smoking ban ... Perhaps something is lost in translation, not because the translator hasn’t done a good job but rather it’s a cultural thing around the French love of the absurd. The ironic humour can be rather wearing, although it does have its highs, and there are lengthy explanations of the chemical effects nicotine has on mind and body. That aside, Smoking Kills is a playful black comedy that will intoxicate and charm those who enjoy a puff of dark Gallic whimsy.
Read Full Review >>
Rave Emma Cazabonne,
Words and Peace
Some passages are totally hilarious ... The book will end in a manner and place you probably never expected ... The book contains also hilarious views on contemporary art and on the world of high executives–[protagonist] Fabrice works as a headhunter in a Consultant Company ... Quirky story, as the French know how to do, with a good dose of dark comedy, by a skilled and entertaining writer.
Read Full Review >>
See All Reviews >>
What did you think of Smoking Kills?
© LitHub | Privacy