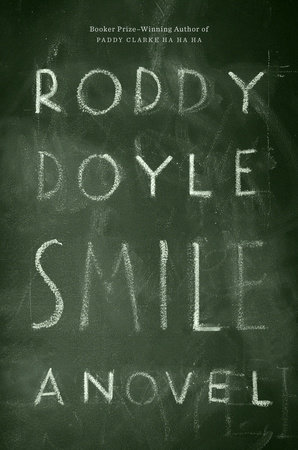 From the Booker Prize-winning author of Paddy Clarke Ha Ha Ha and the Barrytown Trilogy, a novel about a recently-separated middle-aged writer who spends his evenings sitting quietly in a Dublin pub, until the appearance of an obnoxious man who claims to be a former classmate stirs up memories of their time in a Christian Brothers school.

What The Reviewers Say
Rave Ron Charles,
The Washington Post
[Doyle] is the Irish master of crumpled hope — and no country provides stiffer competition in that category. His new novel offers a deceptively languid plot laced with menace. Paced more like a short story than a novel, Smile creates contradictory feelings of poignant stagnation and accelerating descent ... This is a performance few writers could carry off: a novel constructed entirely from bar stool chatter and scraps of memory. But you can’t turn away. It’s like watching a building collapse in slow motion ... Doyle draws adolescence with such crisp empathy and humor that Victor’s memories feel as real as photos of your own childhood. His Catholic schooling under the brothers is charged with excitement and the possibility of violence ... as the novel reaches its crescendo, Doyle shatters the natural structure of his narrative and manages to disorient us despite our weary confidence that we know the dimensions of the molestation tale. It’s a daring move, an attempt to trace the penumbra of abuse across a shattered psyche. For one horrible moment, we get a sense of the victim’s unspeakable confusion, the terror that diverts a life and wrecks a mind.
Read Full Review >>
Rave John Boyne,
The Guardian
There’s an irony to the title of Roddy Doyle’s 11th novel, in that the book eschews most of his trademark humour and the laughs fall thin on the ground. His darkest and perhaps finest work since The Woman Who Walked Into Doors 20 years ago, Smile combines tropes from the various strands of Doyle’s career – childhood memories from the Barrytown trilogy, middle-aged regrets from The Guts and Bullfighting, pub conversations from Two Pints – and merges them into a unique novel, one that is terribly moving and even, at times, distressing, while saving its greatest surprise until the end ... While Doyle has never been a particularly experimental writer, he takes great risks with his story as the novel progresses. To say more would be to spoil the truly unexpected climax that Smile reaches, but suffice to say that to call this the least Roddyesque of Doyle’s work would be an understatement. There is a brave and complex ending to the novel, one that will leave readers astonished.
Read Full Review >>
Positive J. Robert Lennon,
The New York Times Book Review
Smile sags a little bit in the middle, as Doyle chronicles Victor’s somewhat idealized relationship with Rachel. Though we know it’s destined to end, their romance is a shapely, familiar tale about a poor boy, an underdog, managing to land a beautiful, ambitious and moneyed girl; Doyle gives it a poignant, honeyed glow ... In Fitzpatrick, Doyle has created an extraordinarily creepy antagonist: a bully who plays dumb but always gets under the hero’s skin, a clumsy oaf who nevertheless can disappear like a cat into the darkness. Fitzpatrick’s physical presence is palpable and unsettling, uncanny even ... Smile is something of a departure for Doyle — it’s the closest thing he’s written to a psychological thriller — but it nevertheless showcases his well-loved facility for character and dialogue. His ear and eye are peerless ... The book’s ending, though, is anything but prosaic. It is shocking and disorienting, and literally made me gasp in horror. It does serve to justify and explain some of the roteness of the middle section; nevertheless it’s likely to divide readers.
Read Full Review >>
See All Reviews >>
SIMILAR BOOKS
Fiction

Aesthetica
Allie Rowbottom
Positive
What did you think of Smile?
© LitHub | Privacy