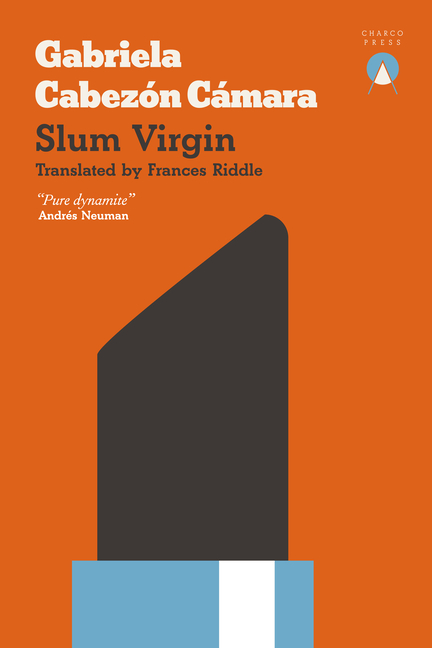 When the Virgin Mary appears to Cleopatra, she renounces sex work and takes charge of the shantytown she lives in, transforming it into a tiny utopia. Ambitious journalist Quity knows she's found the story of the year when she hears about it, but her life is changed forever once she finds herself irrevocably seduced by the captivating subject of her article. The slums of Buenos Aires, the government, the mafia, the Virgin Mary, corrupt police, sex workers, thieves, drug dealers, and debauchery all combine in this sweeping novel.

What The Reviewers Say
Rave Sam Carter,
Asymptote Journal
Frances Riddle’s rendering of Cabezón Cámara’s exuberant range of styles truly shines. Covering everything from lyrics to a funeral elegy and navigating unexpected hybrids with ease—one brief passage, for instance, calls for “a mix of lower-class River Plate dialect and proper Cervantes Spanish”—she deftly captures the rhythms of an often effervescent style ... Slum Virgin is thus never a blind celebration of a space of alterity but rather an exploration of the alternatives posed by those who have little regard for facile categorizations or restrictive roles ... Slum Virgin reminds us that one can never define one’s position in isolation.
Read Full Review >>
Rave Jacqueline Snider,
Library Journal
Originally published in Spanish in 2009, this English translation from Riddle is rich in characterization and energy. As with Cabezón Cámara’s most recent novel, The Adventures of China Iron, which was short-listed for the 2020 International Booker Prize, Argentina takes center stage, as does the LBGTQ community. Cámara has a powerful voice, one to be taken seriously.
Read Full Review >>
Rave Publishers Weekly
Cámara’s stunning tour de force (after the Booker International–shortlisted The Adventures of China Iron) follows Cleo, a trans ex-prostitute, known as the 'transvestite saint' for her visions of Virgin Mary, through accounts from Quity, a down-and-out journalist hoping for redemption ... With humor and a frenetic pace, the propulsive narrative is roiled with fabulism, faith, existentialism, and concern for the rights of the impoverished, all tinged with bittersweet and poetic turns of phrase. Cámara’s breakout tale is mind-blowingly good.
Read Full Review >>
See All Reviews >>
SIMILAR BOOKS
Fiction

Metropolis
B. A. Shapiro
Mixed
What did you think of Slum Virgin?
© LitHub | Privacy