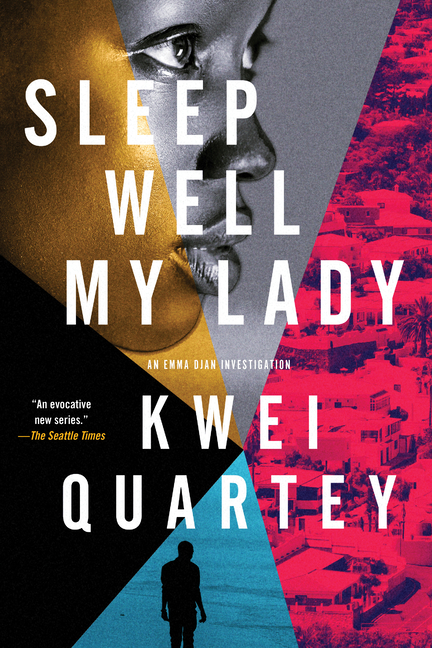 Hard-hitting talk show host Augustus Seeza has become a household name in Ghana, though notorious for his lavish overspending, alcoholism, and womanizing. He's dating the imposing, beautiful Lady Araba, who leads a selfmade fashion empire. Fearing Augustus is only after her money, Araba's religious family intervenes to break them up. A few days later, just before a major runway show, Araba is found murdered in her bed. Her driver is arrested after a hasty investigation, but Araba's favorite aunt, Dele, suspects Augustus Seeza was the real killer. Almost a year later, Dele approaches Emma Djan, who has finally started to settle in as the only female PI at her agency. To solve Lady Araba's murder, Emma must not only go on an undercover mission that dredges up trauma from her past, but navigate a long list of suspects with strong motives. Emma quickly discovers that they are all willing to lie for each other--and that one may still be willing to kill.

What The Reviewers Say
Rave Barbara Lipkien Gershenbaum,
Bookreporter
The architecture of the book is such that each chapter presents a different time frame. As the narrative unfolds, we are kept abreast of the events that hold the plot together and keep it interesting. Readers are always finding out new information that forms a cohesive whole and can easily follow the script without getting confused. Fans of police procedurals and murder mysteries will find Sleep Well, My Lady to be a well-written novel with a believable plot and strong characters who are finely honed.
Read Full Review >>
Rave Beth Kanell,
New York Journal of Books
Quartey lays out scenes like jigsaw puzzle pieces, all pointing in different directions ... Like his earlier books, Sleep Well, My Lady gives Quartey, a Ghana-born Californian physician as well as writer, plenty of space to lay out issues of class and wealth, as well as corruption and political maneuvering. He spins a swift and well-twisted tale of evidence and motives, and of Emma’s efforts both undercover and among the other investigating agents. The bouncing timeline scatters red herrings nicely, and there’s added suspense in seeing various perspectives and wondering how Emma and the team will assemble all the pieces ... ike Alexander McCall Smith’s Botswana series, Sleep Well, My Lady is an all-agency tour de force. But unlike Smith’s series, Quartey adds a satisfying spice of outrage and danger ... It’s good reading, especially for a [...] TBR stack.
Read Full Review >>
Rave Richard Lipez,
The Washington Post
About to strangle an icon of the Ghanaian fashion industry, the killer in the second Emma Djan PI novel takes a moment to muse that the R&B music playing in the victim’s bedroom is 'a tasteful choice.' It’s the kind of weird but revealing character detail that the Ghanaian American Kwei Quartey [...] specializes in ...beautifully crafted tale ...
Read Full Review >>
See All Reviews >>
SIMILAR BOOKS
Fiction

The Hacienda
Isabel Cañas
Positive
What did you think of Sleep Well, My Lady?
© LitHub | Privacy