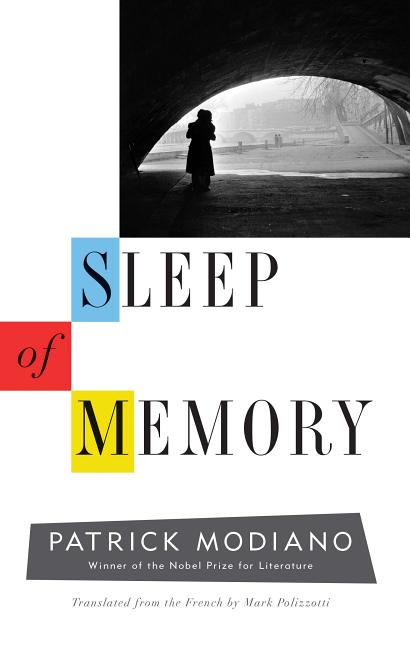 Patrick Modiano's first book since his Nobel Prize is a tapestry that brings together memory, esoteric encounters, and fragmented sensations

What The Reviewers Say
Rave Susan Babbitt,
New York Journal of Books
Sleep of Memory shows how literature trumps philosophy and political theory. Theory can’t show how our lives really are when the way they really are is not how we expect them to be ... [The book] takes us where we don’t expect. It shows what we’re conditioned not to expect by hundreds of years of misguided philosophy and humanism ... Read this book to find a way out of the modern liberal obsession with lines and dreams. They’re useless. Our memories 'blend images of roads that we have taken, and we can’t recall what regions they cross.'
Read Full Review >>
Positive Thomas J. Millay,
Los Angeles Review of Books
We continue to be the beneficiaries of Modiano’s pain with this new novel, which has many of the satisfactions typical of a Modiano novel: absent parents, chance encounters, disappearing women, dalliances in the occult, the mysteries of Paris charted via specific streets and the seasons ... Compared to recent works, however, Sleep of Memory does not have the formal purity of The Black Notebook or the humor of So You Don’t Get Lost in the Neighborhood ... Sleep of Memory is missing these elements of formal purity and humor. Still, it has other virtues. First, it has some of the best aphorisms one can find in Modiano ... Second, there is an unforgettable evocation of domestic space when the narrator goes to visit a friend of a friend named Madeleine Péraud, who teaches yoga and occult sciences ... The third and final virtue has to do with horror. Sleep of Memory manages to attach a feeling not just of unease but of genuine terror to the past.
Read Full Review >>
Positive Michael Autrey,
Booklist
...dream-like ... This darkly evocative novel of one man’s troubling past brings a line from poet John Ashbery to mind, 'One whiffs an era’s bad breath.'
Read Full Review >>
See All Reviews >>
SIMILAR BOOKS
Coming Soon

A Trail of Crab Tracks
Patrice Nganang
Positive
What did you think of Sleep of Memory?
© LitHub | Privacy