Slavery by Another Name: The Re-Enslavement of Black Americans from the Civil War to World War II 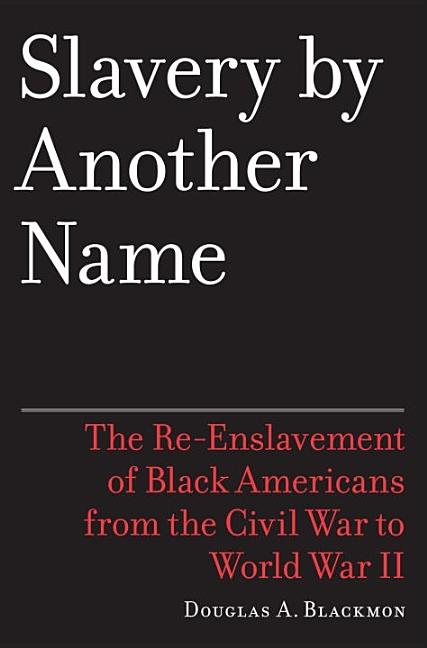 Publisher
Doubleday Books
Date
April 9, 2008
Blackmon brings to light one of the most shameful chapters in American history, the late 1870s through the 1940s when thousands of African-American men were arbitrarily arrested, hit with fines, charged for room and board in state and county jails, and then forced to work off the debt as unpaid laborers.

What The Reviewers Say
Positive Janet Maslin,
The New York Times
Douglas A. Blackmon eviscerates one of our schoolchildren's most basic assumptions: that slavery in America ended with the Civil War. Blackmon unearths shocking evidence that the practice persisted well into the 20th century. And he is not simply referring to the virtual bondage of black sharecroppers unable to extricate themselves economically from farming ... many zealously researched episodes shaky start, if only because many of Blackmon's wordings are speculative ... But as soon as it gets to more verifiable material, Slavery by Another Name becomes relentless and fascinating. It exposes what has been a mostly unexplored aspect of American history (though there have been dissertations and a few books from academic presses). It creates a broad racial, economic, cultural and political backdrop for events that have haunted Blackmon and will now haunt us all. And it need not exaggerate the hellish details of intense racial strife ... The torment that Blackmon catalogs is, if anything, understated here. But it loudly and stunningly speaks for itself.
Read Full Review >>
Positive James Smethurst,
The Boston Globe
A virtual compendium of the death of Reconstruction and the rise of segregation and black disenfranchisement in what the historian Rayford Logan called the nadir of postbellum US race relations ... recounts the huge rise in vigilante violence, lynchings, assassinations, race riots (North and South), inflammatory oratory, laws, and court decisions that circumvented the Constitution and severely circumscribed the rights of African-Americans politically and economically. In some respects, this catalogue of the nadir is one of the book's weaknesses, since it sometimes departs from its account of peonage without much transition. Paying more attention to the considerable presence of involuntary servitude in African-American literature and intellectual history, reaching back to Charles Chesnutt and Paul Laurence Dunbar, would have helped - though Blackmon does mention W.E.B. Du Bois's 1911 novel, The Quest of the Silver Fleece ... Nonetheless, the book vividly and engagingly recalls the horror and sheer magnitude of such neo-slavery and reminds us how long after emancipation such practices persisted. It certainly provides insights on how we might regard the legacy of slavery, reparations, and perhaps even our justice and correctional system, with echoes for our own time.
Read Full Review >>
Positive Walter Russell Mead,
Foreign Affairs
Blackmon does an extraordinary job of re-creating this system for the reader and using old court records and other sources to tell the story of individuals caught up in this chamber of horrors. Jim Crow was much more than discrimination; it was a system of oppression, and its legacy is in some ways more corrosive than that of slavery. This book will help readers begin to grasp the horror of an evil that persisted into living memory.
Read Full Review >>
See All Reviews >>
What did you think of Slavery by Another Name: The Re-Enslavement of Black Americans from the Civil War to World War II?
© LitHub | Privacy