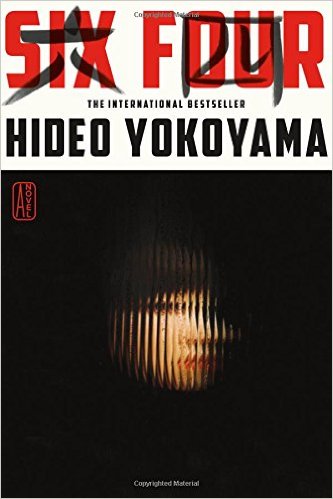 A literary blockbuster in Japan in 2011. Fourteen years after a Japanese schoolgirl is kidnapped, the mystery remains unsolved. The police department’s press officer?Yoshinobu Mikami, a former detective who was involved in the original case and who is now himself the father of a missing daughter?is forced to revisit the botched investigation.

What The Reviewers Say
Rave Terrence Rafferty,
The New York Times Book Review
Because this is a detective novel, the hero does, of course, detect, but until the final pages there’s not much of the customary game’s-afoot, thrill-of-the-chase sort of suspense in Six Four...although the novel is written in the third person and has an enormous cast of characters, the only perspective Yokoyama gives us is Mikami’s. There’s no breathless crosscutting in this narrative, no relief from the protagonist’s constant, anguished self-interrogation ... To Mikami’s flatfoot heart, such doubts and uncertainties seem momentous, and amazingly, Six Four makes them seem momentous to us too ... What Yokoyama does in Six Four evokes — improbably — the fastidious ethical parsings of a novel by Henry James, all qualms and calibrations, and while that might not sound like a good idea, he makes it work. He writes, fortunately, in plain, declarative prose, and because Mikami is such an ordinary man the mental gymnastics he puts himself through are moving and sometimes deeply funny ... this novel is a real, out-of-the-blue original. I’ve never read anything like it.
Read Full Review >>
Rave Dennis Drabelle,
The Washington Post
Hideo Yokoyama’s complex, ingenious and engrossing new novel, Six Four, has no serial killers, no femmes fatales, no locked-room murders, no torture, no sexually repressed villains, not even much in the way of forensic evidence. Instead we have one-sided telephone calls (one party does nothing but listen), bureaucratic infighting, snarled relations between the police department of a Japanese prefecture and the local media, and a strikingly original plot ... Jonathan Lloyd-Davies has translated Six Four with unobtrusive brio, and the publisher has obligingly provided a Cast of Characters to help us keep straight a small multitude of cops, wives, reporters and victims. As for the author, he possesses that elusive trait of a first-rate novelist: the ability to grab readers’ interest and never let go.
Read Full Review >>
Rave Mark Lawson,
The Guardian
The plot would grip in any language but, for readers in the west, there is extra fascination in Six Four being not just a police procedural but a guide book to Japan ... Such details were presumably commonplace for Japanese readers; for a foreigner, they keep the cop novel unusually fresh and tense. But the book also has universal elements ... Jonathan Lloyd-Davies’ English reads speedily and cleanly. Much of the prose is simple atmospherics but there are also deeper moments ... Yokoyama’s novel matches the immersive, unnerving, anthropological momentum of Jane Campion’s great New Zealand television crime drama, Top of the Lake. There’s much talk these days of binge viewing; here is a binge read.
Read Full Review >>
See All Reviews >>
SIMILAR BOOKS
Coming Soon

On Java Road
Lawrence Osborne
Rave
What did you think of Six Four?
© LitHub | Privacy