Sisters of the Vast Black 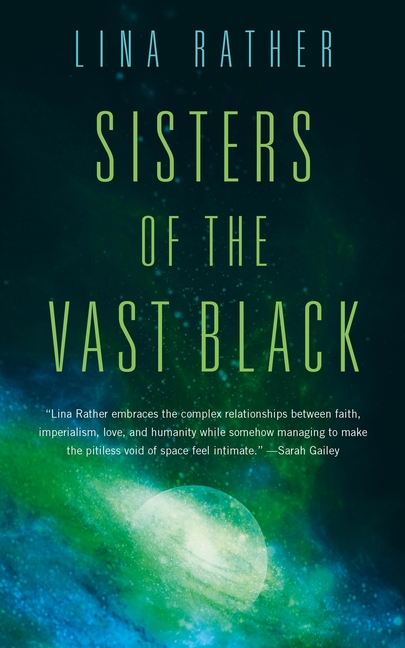 Years ago, Old Earth sent forth sisters and brothers into the vast dark of the prodigal colonies armed only with crucifixes and iron faith. Now, the sisters of the Order of Saint Rita are on an interstellar mission of mercy aboard Our Lady of Impossible Constellations, a living, breathing ship which seems determined to develop a will of its own.

What The Reviewers Say
Rave Alex Brown,
Tor.com
... hard sci-fi that feels soft. Musings on philosophy, theology, and morality get as much airtime as descriptions of the mechanics of the living ship and the scientific context for space colonization. Why characters act the way they do is as crucial as how they move from place to place. Each character, from the nuns to their enemies to the hardscrabble denizens living on the outskirts of society, feels realistic and fully realized ... Lina Rather squeezes in more worldbuilding in under 200 pages than many authors do in a multi-book series but it never feels overwhelming. Rather gives us just enough history and science for the plot and character development to make sense and feel impactful but not enough to distract from the point. In a story this short, that’s a fine line to walk and all the more impressive that she managed it ... This is the kind of story that sticks with you long after you finish it.
Read Full Review >>
Positive Jane Huang,
Paste
... ambitiously tackles theology, personal faith crises, centralized governance, the sentience of creatures, bioengineering, sexuality, sin, and redemption—all in 160 pages ... Due to the novella’s brevity, it’s initially difficult to distinguish one character from another. But as each sister’s history and secrets are revealed, it’s easier to determine how a character’s past influences their actions. Pacing issues parallel the initial muddied characterizations in the beginning, and much of the world-building occurs through dialogue between characters rather than through the narrative ... Fortunately, Rather ties everything together with dazzling mastery in the novella’s second half. The time she invests in the characters during quiet moments pays off as a series of plot twists and reveals propel the narrative forward at breakneck speed ... Even as Rather raises the story’s stakes to concern the fate of the whole galaxy, the narrative remains intensely personal and focused on the individual sisters ... By the hopeful and open-ended conclusion, you’ll be left wanting to spend more time with Rather’s characters ... doesn’t shy away from the big themes despite its small package, and it will successfully whet the appetite of anyone looking for a fresh take on the space opera genre.
Read Full Review >>
Positive John Keogh,
Booklist
... a compelling blend of religious and moral challenges, science and politics. Awfully heady stuff to tackle in a novella, but Rather succeeds with intelligence and empathy. Her world building is exceptional, especially in her descriptions of the little details on the sisters’ living ship. Her characters are authentic and developed with compelling back stories. What stands out the most is Rather’s lyrical and assured style. Her language invites the reader in and sustains a sense of wonder within a challenging world. This is a beautifully written work.
Read Full Review >>
See All Reviews >>
SIMILAR BOOKS
Fantasy

40
Alan Heathcock
Positive
What did you think of Sisters of the Vast Black?
© LitHub | Privacy