Sisters in Arms: A Novel of the Daring Black Women Who Served During World War II 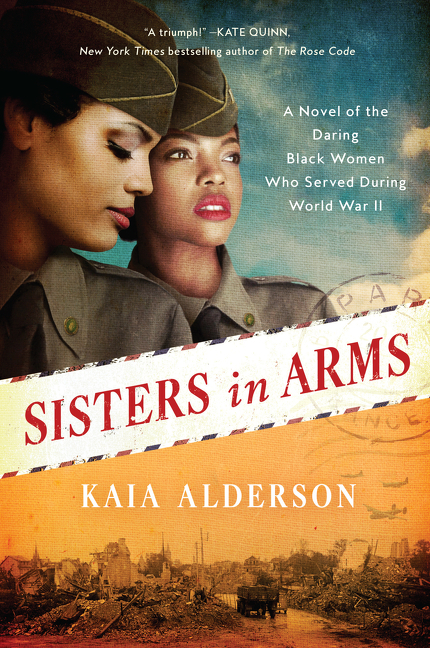 Reveals the untold, true story of the Six Triple Eight, the only all-Black battalion of the Women’s Army Corps, who made the dangerous voyage to Europe to ensure American servicemen received word from their loved ones during World War II.

What The Reviewers Say
Rave Edith Kanyagia,
BookPage
... witty and powerful ... stands out for its originality in exploring a lesser-known part of World War II and American history. The novel also incorporates the inspiring contributions of real Black historical figures ... The novel is not only a historical account of the war but also a beautifully interlacing tale of loss, friendship and romance ... An outstanding historical novel, Sisters in Arms succeeds at celebrating the accomplishments of the Six Triple Eight Battalion through the lives of two audacious Black women.
Read Full Review >>
Rave Emily Borsa,
Booklist
... gives readers an inside look at the racial injustices and rigors of wartime that the women battled. Alderson sweeps readers in with Grace and Eliza’s personal journeys through a little-known portion of our army’s history. Themes of female friendship, bravery, and resilience radiate from the pages of this magnificent novel.
Read Full Review >>
Positive Publishers Weekly
... impressive ... Descriptions of boot camp and a U-boat chase during their voyage to Europe are standouts before the battalion is charged with a dangerous mission distributing mail to troops in England and France. Though the dialogue can feel underdeveloped, Alderson impresses with her account of trailblazing Black characters who battle racism and misogyny. The adventures of the Six Triple Eight will captivate readers.
Read Full Review >>
See All Reviews >>
SIMILAR BOOKS
Fantasy

The Falcon's Eyes
Francesca Stanfill
Positive
What did you think of Sisters in Arms: A Novel of the Daring Black Women Who Served During World War II?
© LitHub | Privacy