Showtime at the Apollo: The Epic Tale of Harlem's Legendary Theater 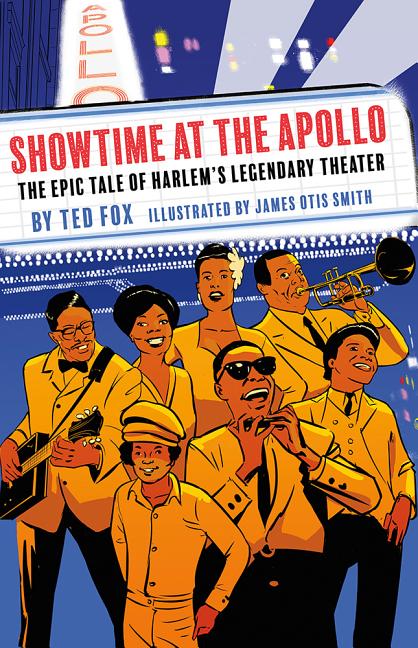 The author of Showtime at the Apollo: The Story of Harlem’s World Famous Theater teams up with a comics artist to put a visual spin on the history of Manhattan's iconic theater, which since 1934 has nurtured many of the nation's most celebrated African American performance artists.

What The Reviewers Say
Positive George Gene Gustines,
The New York Times
The graphic novel juggles the sometimes harsh realities of the outside world and the magic of the performances on stage. There is drug abuse, robberies and riots—but the overall outlook remains upbeat. Like a biopic, the second act is filled with highs and lows ... sobering moments balance the euphoria of other events, like the live recording of a 1963 album by James Brown ... smartly placed newspaper clippings...move the story along ... the third act delivers the start of a happy ending ... Order is restored...with a multitude of lights.
Read Full Review >>
Positive Zach Berkley,
Library Journal
The carefully researched narrative features those who worked and performed at the Apollo over the years and strives to portray the good times as well as the bad. Smith's...dynamic artwork often eschews traditional comics panels in favor of images and scenes that flow together, conveying the energy and excitement of showbiz. The two-tone, black-and-blue coloring creates the feeling of being inside a darkened theater, although it could have benefited from occasional splashes of contrasting hues. And while the amount of information presented can be almost overwhelming, the work ultimately accomplishes its goal of relaying the Apollo's status as a legendary venue ... Anyone interested in African American music and history and pop culture history will find this a captivating read.
Read Full Review >>
Mixed Etelka Lehoczky,
NPR
The voices in this book are almost uniformly boosterish about their theater because it truly feels like their theater, even if it was owned by white guys for much of its history. Fox echoes their enthusiasm, skimming briskly past the bleak parts—from cockroaches in the dressing rooms to riots out in the streets. Smith's art has a similar mythmaking quality—all his depictions of the Apollo's performers are iconic. He draws these entertainers at their best possible moments, just as they'd like to see themselves. Though he captures numerous electrifying onstage scenes, he softens the showbiz lifestyle's gritty side. These are understandable choices, but they result in a book that's too invested in its own myths to be a great read. That may be the only way to write about the Apollo, though ... It's shame Fox and Smith couldn't explore this potent mix [of 'shame and desperation'] more thoroughly ... But at the Apollo, hope is always the heart of the dish.
Read Full Review >>
See All Reviews >>
What did you think of Showtime at the Apollo: The Epic Tale of Harlem's Legendary Theater?
© LitHub | Privacy