Shortest Way Home: One Mayor's Challenge and a Model for America's Future 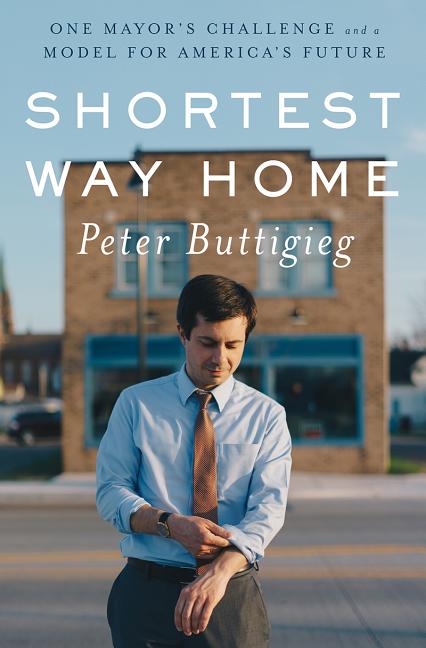 The 37-year-old mayor of South Bend offers up a narrative about his life as a gay Rhodes scholar and a Navy man and his strategy for overseeing the economic rejuvenation of the Indiana city.

What The Reviewers Say
Positive E.J. Dionne Jr.,
The Washington Post
There are moments here where Buttigieg seems to be pushing things a bit: The story of his piano recital with the South Bend Orchestra is cute but not the stuff of greatness. On the other hand, his candid discussion of what it’s like to come out as gay while serving as a small-city mayor and, especially, his warm and engagingly hokey description of falling in love with the man who would become his husband break important new ground in a pre-presidential autobiography ... And in [Buttigieg's] description of his military service in Afghanistan as a Navy Reservist, the lack of drama is admirable. He identifies himself with the rank-and-file; there is no puffed-up heroism here. He is, however, properly critical of the failure of those who share his elite educational pedigree to join the military in a time of war ... these pages make a pretty good case that city halls just might be better training schools for the presidency than attendance at any five years of congressional hearings combined.
Read Full Review >>
Mixed Adam Nagourney,
The New York Times Book Review
Until he recounts writing his coming-out essay for The South Bend Tribune, I had begun to wonder if Buttigieg had decided to airbrush his life story, with an eye to some future opposition researcher combing through these pages. This lends a cautious, sanitized feeling to some episodes ... No one would ever accuse Buttigieg of being an evocative writer, but the story is told with brisk engagement—it is difficult not to like him—without sinking into the kind of prose one might fear from someone trained in writing reports for McKinsey. He writes with particular clarity when it comes to the subject of romance ... After reading this memoir...the notion that Buttigieg might be the nation’s first openly gay president doesn’t feel...as far-fetched.
Read Full Review >>
Mixed Caroline Fraser,
New York Review of Books
Buttigieg somehow relates this charmed life with suitable self-effacement, eyes cast modestly downward as in the photograph on the book’s cover, a not unimpressive feat given the perfection of his résumé ... Not so fast ... There are gaps in the record. There’s an avoidance of self-analysis, a refusal to plumb motivations, a tiptoeing across the minefield of human experience. Its wide-eyed ingenuousness strains credulity if only because all credulity, in the age of Trump, is now so strained that it may be collapsing, like the climate, altogether. The self-presentation is too glossy, too ideal. Nowhere does one get the sense that the author has ever experienced a setback or suffering of any kind ... But it’s hard to escape the suspicion that this frictionless memoir represents, beyond the obvious political calculation, an act of self-conscious second-guessing ... There’s not a lot of Joycean revelation going on here. Instead, Buttigieg often approaches himself with Spock-like detachment ... The most revealing anecdote Pete Buttigieg has told about himself occurs not in Shortest Way Home but in the New York magazine profile ... there’s a sad, Pinocchio-like quality to him ... Can he become a real boy? A real politician? First he must prove himself brave, truthful, and unselfish. With this memoir, in which our hero emerges from a bedtime story of a book freshly carved and polished for his political future, he may be halfway there.
Read Full Review >>
See All Reviews >>
What did you think of Shortest Way Home: One Mayor's Challenge and a Model for America's Future?
© LitHub | Privacy