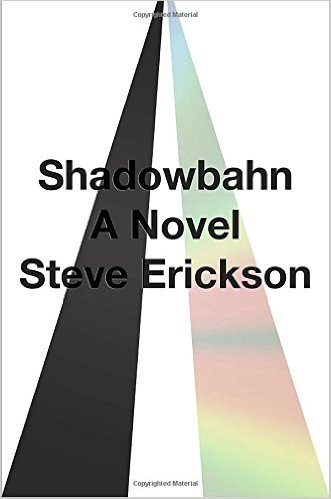 Set in a dystopian near future, Shadowbahn is a chronicle of a weird road trip, a provocative work of alternative history, and a discography of the twentieth and twenty-first centuries. A meditation on the meaning of American identity and of America itself.

What The Reviewers Say
Rave Michael Robbins,
The Chicago Tribune
It's the novel of now — this moment that just passed and the one just around the bend — the first novel of the Trump years, of tatterdemalion America, the starless stripes, as one of Erickson's chapter headings has it. A novel for 'a defiled century and whatever defiled world inhabits it' The Towers rise again, displaced, in a country riven by conflict, hostility, disputed territory, secession. It's the return of a history so repressed that it is all on the surface — a national imaginary so Towers-haunted, so Confederate-flagged, that tragedy must manifest physically as farce in order to reveal just how little anyone understands ... He gets compared ad nauseam to Thomas Pynchon, understandably...For all his magical-mystery-tourism, though, Erickson's not a wacky writer; he descends to Pynchon-level dad-jokiness only in Jesse's record review, where it works. And he's anything but gargantuan. He's a termite to Pynchon's white elephant, nibbling away at the map's edges instead of expanding them to cover the territory. This means he can get too mystical, trying to say more than his canvas will allow ... These are minor cavils. This is a novel we need, even if it's somewhat predictably moved by a ghostly patriotism that doesn't dampen rage so much as bewilder it. Even those readers for whom patriotism however bewildered was never an option might accept one rooted, as Erickson's is, in the resistance of the Sioux Nation at Wounded Knee ... he's written a battle hymn: 'No one believes in the same country anymore and probably never has.'
Read Full Review >>
Rave Fiona Maazel,
The New York Times Book Review
It’s hard to know where to begin. Steve Erickson’s 10th (10th!) novel is: compassionate, weird, unpredictable, jaunty. It’s sad, and it’s droll and sometimes it’s gorgeous. Some readers will be confused by its 'plot' until realizing there’s little point trying to figure out what exactly is going on. Others will find their footing in Erickson’s supremely engaging interest in the landscape of American music ... It’s really not a novel in which (snore) A and B do X, Y, Z. It’s more like a polyphonic dirge for an America that has perhaps never lived anywhere but in the imagination of those of us who keep fighting for it anyway ... Erickson has mobilized so much of what feels pressing and urgent about the fractured state of the country in a way that feels fresh and not entirely hopeless, if only because the exercise of art in opposition to complacent thought can never be hopeless ... The mockery, longing and disillusionment of this music are splashed all over Shadowbahn ... In 2017, it reads like an answer to and sanctuary from the American Century to come.
Read Full Review >>
Rave Chris Vaughn,
The Rumpus
This is an extremely timely novel, as much by unfortunate accident as by design. If Hilary Clinton had won in November Shadowbahn still would be a profound precautionary tale, but Donald Trump’s election lends it a portentousness Erickson himself couldn’t entirely have seen coming ... Erickson is a master of refraction. His narrative fractals fit together exactly at the point you think they’re about to fall apart. But the parallel world we enter when reading Shadowbahn is a serious confabulation. We witness mass cultural amnesia as characters float through an America pervaded by uncertainty, fractured by a sweeping Disunion movement. This book is not a political novel because it deals in hinterlands. It isn’t topical or tabloid. It’s a book not so much about American history as about American memory ... This unconditional approach to art over business makes Erickson’s work an antidote, arriving at a pivotal moment. Shadowbahn will be an epoch-defining book in Trump’s America. It’s an American Heart of Darkness almost by accident.
Read Full Review >>
See All Reviews >>
SIMILAR BOOKS
Fiction

The Deceptions
Jill Bialosky
Positive
What did you think of Shadowbahn?
© LitHub | Privacy