Seven Samurai Swept Away in a River 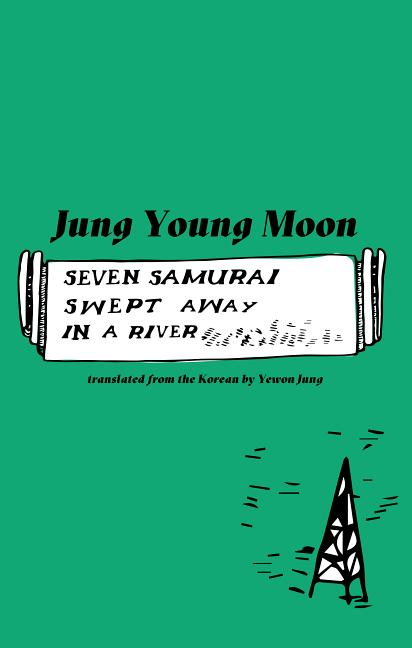 Recounts Korean cult writer's Jung Young Moon’s time spent at an artist’s and writer's residency in small-town Texas. The author reflects on his outsider experiences in this most unique of places, learning to two-step, musing on cowboy hats and cowboy churches, blending his observations with a meditative rumination on the history of Texas and the events that shaped the state.

What The Reviewers Say
Rave Letitia Montgomery-Rodgers,
Foreword Reviews
... impressive fluidity, with one example giving rise to another like a lucid dream ... At times an absurdist narrator, at other times stoic, Moon is always in on the philosophical joke. The book does and doesn’t 'really have much to say,' and calls itself 'a novel that even a passing dog would laugh at.' By embracing this nether space, Moon creates a darkly comic meta-text about the liminality of what we experience and create.
Read Full Review >>
Positive Michelle Newby Lancaster,
Lone Star Literary Life
In his trademark stream-of-consciousness style, Moon admirably grapples with himself and the peculiarities and paradoxes of twenty-first-century Texas, while questioning what has meaning and what doesn’t, who gets to decide, and the nature of the novel as a literary form ... The melancholy is such that I was startled when Moon visits a farm and notes 'a very cute donkey' ... Moon crafts page-long sentences that do not meander; his musing is focused—hats off to translator Yewon Jung. Moon also exhibits a joy in words ... His repetition of certain words lends a meter to his prose, as if he might be a poet ... Moon has a droll, dry wit that reminds me of Steven Wright and had me chuckling aloud.
Read Full Review >>
Positive M.A.Orthofer,
The Complete Review
The idea of stream/paralysis/derangement of consciousness sums up the novel well: this isn't episodic, plot-driven fiction, but rather very much goes with the flow, as Jung glides from one topic to another, seemingly whatever comes to mind. His riffs aren't so much digressions as the point and substance ... while much is incidental, quite a few of the riffs do go in some depth ... Jung certainly specializes in the off-beat, as regards both subject matter and presentations ... an odd little story, not quite going nowhere but certainly spiraling and looping about -- with as strong Texas flavoring -- without particularly obvious progression. The variety -- and the fact that it doesn't go on too long -- make for an entertaining enough little volume.
Read Full Review >>
See All Reviews >>
SIMILAR BOOKS
Coming Soon

My Brilliant Life
Ae-Ran Kim
Rave
What did you think of Seven Samurai Swept Away in a River?
© LitHub | Privacy