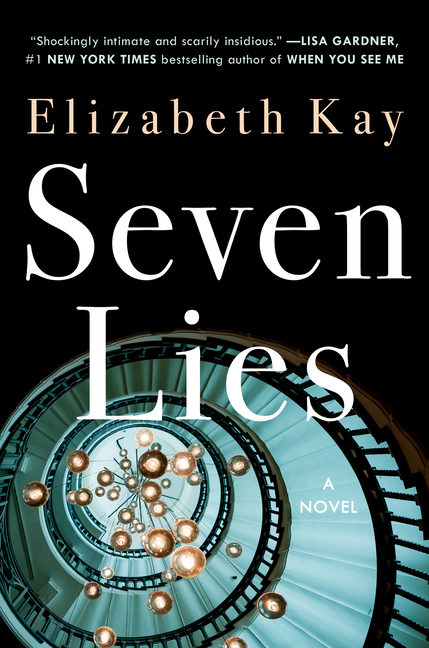 Growing up, Jane and Marnie shared everything. They knew the other's deepest secrets. They wouldn't have had it any other way. But when Marnie falls in love, things begin to change.

What The Reviewers Say
Positive Laura Hubbard,
BookPage
... a heart-pounding portrait of a sociopath committed to maintaining control of a friendship. What makes the novel remarkable is not that Jane is a sociopath—it’s how badly you want to like her anyway ... Kay uses the gentle cadence of her main character’s voice to pull readers down the slippery slope of rooting for the bad guy ... Full of uneasy suspense, Seven Lies may leave you wishing that just this once, the villain could get away with it. Be ready to wince, shudder and—above all else—exist for several hours at the edge of whatever seat you happen to be occupying.
Read Full Review >>
Positive Vicki Weisfeld,
Crime Fiction Lover
... immersive ... from page 10 of Seven Lies onwards, you know where this is going, yet author Elizabeth Kay effectively strings you along as the box Jane has constructed for herself becomes smaller and smaller ... The close-in perspective never gets boring, as Jane has the capacity to surprise, to insinuate, and while you may peg her right away as an unreliable narrator, nothing she does seems out of character or discordant with her world view. She sees things through a particular, distorted lens, and, as Jane herself would say, ‘you understand’.
Read Full Review >>
Positive Erin Holt,
Booklist
ane is a creepy, unreliable narrator who speaks directly to the reader in this chilling, hypnotic book. An alibi, a journalist in hot pursuit of the truth, and two women being torn apart as they attempt to differentiate their friendship from the romantic love of their husbands: these are all pieces that haunt those looking for the truth. This novel turns female friendship on its head as its obsessive narrator builds her story one lie at a time.
Read Full Review >>
See All Reviews >>
SIMILAR BOOKS
Coming Soon

On Java Road
Lawrence Osborne
Rave
What did you think of Seven Lies?
© LitHub | Privacy