See What I Have Done 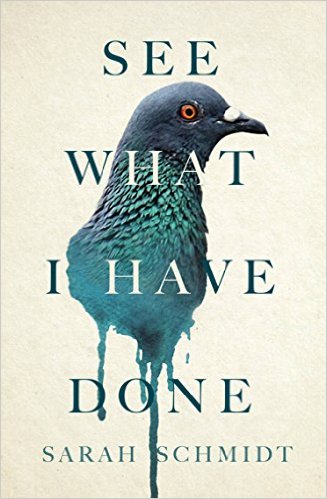 A dark, claustrophobic reimagining of the Lizzie Borden story: one of the most infamous murder cases in American history.

What The Reviewers Say
Rave Justine Jordan,
The Guardian
Schmidt is less interested in contriving a new version of what 'really' happened on that fateful morning in 1892 than in plunging the reader into a claustrophobic nexus of family resentments and frustrations, probing obsessively at the faultline between love and hate ... The blurring of voices and perceptions, particularly between Lizzie and Benjamin, and obsessive repetition of words and symbols only add to the irresistible momentum and fevered intensity of the book: part fairytale, part psychodrama ... At the same time, much backstory is cleverly withheld: there are hints at Lizzie’s instability, but we bring our own assumptions to her character ... We get only glimpses into the particular hell of the Borden household; the fact that we can fill in the blanks from our own darkest places draws us closer, more uncomfortably, in. Schmidt’s unusual combination of narrative suppression and splurge makes for a surprising, nastily effective debut.
Read Full Review >>
Rave Steph Cha,
USA Today
Schmidt paints a picture of a house in crisis, stroke by violent stroke ... Her eerie voice makes for intense, dizzying reading, conveying the corrupt atmosphere of the house, the suffocating sense of wrongness every character seems to feel under the skin ... Schmidt inhabits each of her narrators with great skill, channeling their anxieties, their viciousness, with what comes across as (frighteningly) intuitive ease. Everything about Schmidt’s novel is hauntingly, beautifully off. It’s a creepy and penetrating work, even for a book about Lizzie Borden.
Read Full Review >>
Mixed Patrick McGrath,
The New York Times Book Review
The permeability or porousness of the human body is stressed throughout the novel. There are repeated references to blood and bleeding, to smells of rot and urine, to self-cannibalization ... The Borden house is, in short, a house of horror, as in its way is Lizzie Borden’s psyche. The dynamic interplay of these ideas and images works wonderfully in the first half of the novel, and goes far to create an atmosphere of truly grisly unwholesomeness. Schmidt convincingly establishes the conditions in which that most unnatural of acts could occur, the apparent murder by a child of her parents ... The narrative structure of See What I Have Done squanders that tension. There are too many voices and shifts in the time scheme as the novel moves into its final hundred pages. The effect is to undermine the dynamic previously established, both in the Borden household and in Lizzie’s sickening mind ... Sarah Schmidt has created a lurid and original work of horror. It’s a pity that some of its force has been dissipated by its disorganized and overlong second half. As a result, the novel lacks the ever-tightening narrative torque that might more effectively have delivered the lovely shocker on the last page.
Read Full Review >>
See All Reviews >>
What did you think of See What I Have Done?
© LitHub | Privacy