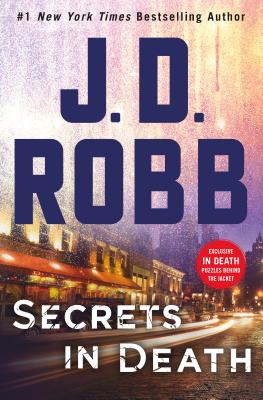 The latest installment of Robb's In Death mystery series, set in near-future New York, where Lt. Eve Dallas must separate rumors from reality when a woman who traffics in other people’s secrets is silenced.

What The Reviewers Say
Rave Allison Brennan,
Criminal Element
After 45 books, there’s a maturity to this series that makes it shine above most other long-running mystery series. Every book is as smooth as good whiskey, well-crafted, intriguing, and downright fun. Secrets is no exception ... While on the one hand, Secrets is a twisty, smart police procedural, we also are treated to in-depth characters that truly elevate the entire series ... The mark of a true storyteller is to transport the reader to another place and time, and J. D. Robb does it once again.
Read Full Review >>
Positive Publishers Weekly
Robb fleshes out the main action with such tantalizing puzzles as the reason for Mars’s extensive plastic surgery and the location of the hidey-hole she must have kept. Robb continues to impress with her ability to make the same murder mystery formula fresh.
Read Full Review >>
Mixed Kirkus
...the nominal victim’s insatiably feral nature makes it hard to work up an equal level of outrage over her murder or to feel much of a sense of closure when Eve plucks the perp from a crowded field of suspects who would all have been perfectly within their rights in shutting down the blackmail factory by fair means or foul. The 45th entry in this fleet, easy-reading series provides a dramatic opening scene, a second act guaranteed to raise your most self-righteous hackles, and a denouement even Robb must have recognized as an anticlimax.
Read Full Review >>
See All Reviews >>
SIMILAR BOOKS
Coming Soon

On Java Road
Lawrence Osborne
Rave
What did you think of Secrets in Death: An Eve Dallas Novel?
© LitHub | Privacy