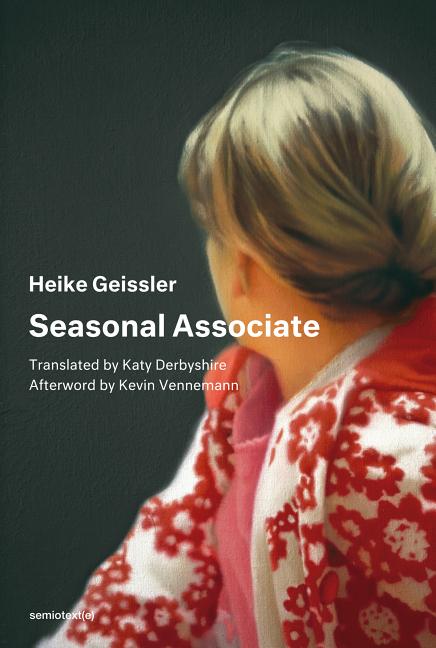 A writer's account of her experience working in an Amazon fulfillment center and how the robotic monotony of the job is transformed into exhaustion, shame, and self-doubt.

What The Reviewers Say
Rave Naomi Fry,
The New Yorker
Geissler’s aim is to communicate that beneath this abstraction, however, laborers are individuals. In that sense, Seasonal Associate belongs to the long literary tradition of social-problem novels, which includes Charles Dickens’s Hard Times Upton Sinclair’s The Jungle and John Steinbeck’s The Grapes of Wrath—all of which attempt to reveal, in their careful, humanizing treatment of character, fully realized protagonists caught within stultifying and impersonal industrial mechanisms. In a contemporary case like Geissler’s, this kind of project is no less urgent.
Read Full Review >>
Positive Jesse Barron,
Bookforum
To my knowledge, Geissler’s book is the first to present Amazon’s products as they appear in real time to the worker. Reading her lists made me nauseous, the way staring at a spinning compass needle might. These items do not relate to one another in any discernible way. There is no organizing consciousness. There is only an algorithm ... Like Seasonal Associate, Down and Out in Paris and London describes a specific warren of capitalism—Orwell’s 'Hotel X' is Geissler’s Amazon warehouse—and also attends closely to the humiliations of being poor. Geissler’s envy at seeing her friend’s book on her pallet correlates to Orwell’s shame at seeing a prosperous friend approaching on the street in Paris. (He hides in a café.) But Geissler’s challenge is different than Orwell’s, because her material is flatter ... To treat the Leipzig warehouse with the warmth and looseness of Orwell would be absurd; Amazon shears those shopworn tropes off the surface of reality, leaving only a fluorescent-lit Hades. The shades get a few minutes to tell their stories, then the forklift returns.
Read Full Review >>
Rave Josephine Livingstone,
The New Republic
Alienation is the chief theme in Heike Geissler’s 2014 book Seasonal Associate, published in the U.S. for the first time this December ... Embedded into the very narrative structure of Seasonal Associate is Geissler’s awareness that the laborer under capitalism, bereft of control, splits into multiple selves who are alienated from each other. Who is the 'I' who works for Amazon, and why is she so quiet? Geissler presses down hard on the identity changes that take place inside the worker who does not see herself in her work, then sublimates that analysis into the texture of her account. This literary-political hyperawareness might sound intrusive or unhelpfully cerebral, but it actually reads as consolation ... In Seasonal Associate, Geissler finds the absolute limit of writing about labor, at the very moment that history seems to have hit the same point. The 'you' of Seasonal Associate is also, of course, the reader: This book is required reading for any consumer with a conscience. You won’t leave it without taking action.
Read Full Review >>
See All Reviews >>
What did you think of Seasonal Associate?
© LitHub | Privacy