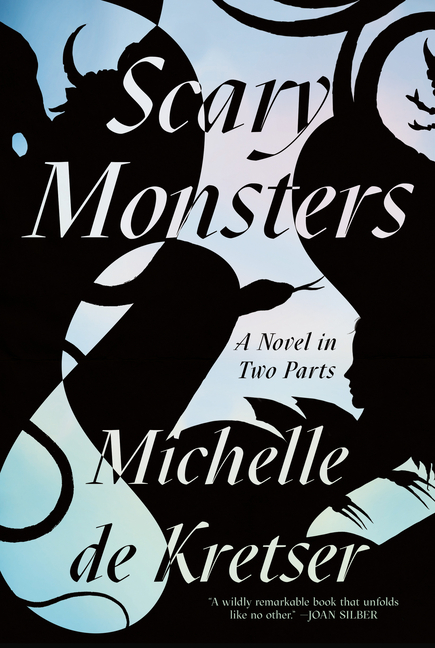 Scary Monsters is made up of two narratives, each told by a South Asian migrant to Australia. Lili's family migrated to Australia from Asia when she was a teenager. Now, in the 1980s, she's teaching in the south of France. She makes friends, observes the treatment handed out to North African immigrants, and is creeped out by her downstairs neighbor. All the while, Lili is striving to be A Bold, Intelligent Woman like Simone de Beauvoir. Lyle works for a sinister government department in near-future Australia. An Asian migrant, he fears repatriation and embraces "Australian values." He's also preoccupied by his ambitious wife, his wayward children, and his strong-minded elderly mother. Islam has been banned in the country, the air is smoky from a Permanent Fire Zone, and one pandemic has already run its course.

What The Reviewers Say
Rave Alex Preston,
New York Times Book Review
In a formally experimental conceit that tips its hat to B. S. Johnson and Ali Smith, this is a novel of two halves printed back to back and upside down ... This is a novel about the immigrant experience ... Early on in this section, Lyle drops another hint about the book’s structure. “Which comes first, the future or the past?” he asks ... It’s an explicit signal to link the two parts of this book, to see the horrifying endgame of Minna’s seemingly benign orientalism ... This is just another point of connection between what seem on the face to be two very different stories, but whose power lies in the imaginative work the reader has to do to link them, to find clues to the future in the past. It’s a brilliant use of negative space, and contributes to the lasting power of this fine and stereoscopic contemplation of the migrant experience.
Read Full Review >>
Rave Claire Messud,
Harpers
Each work teaches us how to read it, engaging more or less with formal or genre conventions, and thereby shaping our understanding. With her new book...Michelle de Kretser asks us to shift from the familiar ... Whether you begin with Lili or Lyle, the range and verbal pleasures of de Kretser’s considerable gifts are compelling. Both sections explore themes of gender, race, and displacement ... The relationship between Lili and Lyle...is intuitive, rather than overtly drawn ... De Kretser captures with luminous specificity Lili’s experiences as a young woman in provincial France in the early Eighties ... Lili gradually awakens to the complexities of race and class, and in these moments of heightened awareness de Krester’s biting sense of humor is often on full display ... De Kretser is a wonderful writer, and woefully underrated in this country. Though her skewering satire is pointed and painful, her gallows humor keeps the reader smiling.
Read Full Review >>
Rave Anthony Cummins,
The Guardian (UK)
Slyly intelligent ... It’s typical of De Kretser’s sophistication that she leaves the link between these narratives entirely up to you – even the order in which they are to be read is left to the individual reader, given the book’s reversible, Kindle-defying two-way design ... Lili’s story unfolds as a coming-of-age vignette portraying the lonely restlessness of unfocused sexual desire and shapeless creative ambition. Regular moments of comedy erupt ... Yet there’s steel, too ... There’s a certain riddling quality here. While the doomy tendency of Lyle’s segment all but snuffs out the heady sense of possibility captured in Lili’s thread, the book’s overriding sense of anger and alarm also mingles with satirical glee. Even if she obviously has the apocalyptic drift of the present in sight, De Kretser passes on to the reader the inescapable feeling that she’s also having fun, in this engaging amalgam of lament and warning shot.
Read Full Review >>
See All Reviews >>
SIMILAR BOOKS
Fiction

Margot
Wendell Steavenson
Mixed
What did you think of Scary Monsters: A Novel in Two Parts?
© LitHub | Privacy