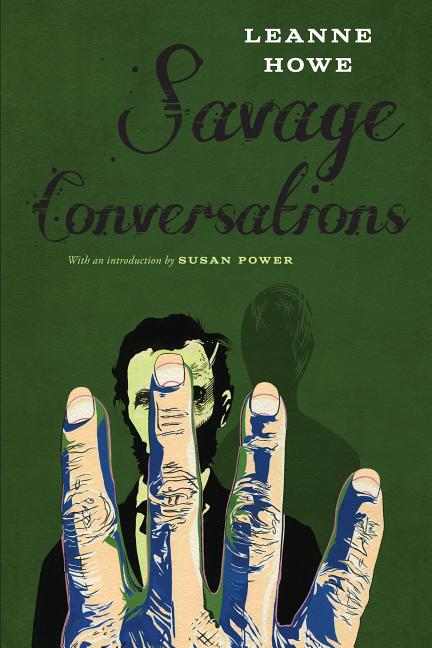 In this genre-bending book of poetic drama that draws on the record of Mary Todd Lincoln's psychiatric problems and her institutionalization, the First Lady is haunted by the ghost of a "Savage Indian" who confronts her about her complicity in the 1862 hanging of 38 Dakota Indians ordered by President Lincoln.

What The Reviewers Say
Rave Nathan Scott McNamara,
Los Angeles Review of Books
Howe is a genre chemist, mixing disparate textual, visual, and auditory techniques to create singular narrative energy ... Among other things, Savage Conversations is an interrogation of the depth and rot of American racism ... One of the startling undertakings of Savage Conversations is realizing the darkness of Todd Lincoln’s mind and still finding a way to care and worry for her ... But Savage Conversations operates without sentimental nostalgia; it fixes its gaze on the horror that is omnipresent in American history, even by our favorite figures ... Savage Conversations operates with a savage intimacy that goes beneath the skin, that creeps and bleeds and transubstantiates back into something that haunts us, that reminds us in a Faulknerian sense that the past isn’t dead; it not even past.
Read Full Review >>
Rave Sarah Fawn Montgomery,
Poetry Foundation
...a sui generis collection of poetry and drama ... Savage Conversations is a well-researched yet intuitive depiction of a history that’s too often omitted from textbooks and cultural memory. Conceived as a lyrical theater of the absurd, and written in the form of a play, Howe’s book puts the grotesque spectacle of American history in the spotlight ... Howe’s lyric fragments and rhythm (re)tells a story that’s often shunted through the linear, patriarchal lens of history ... Lyric fragments run together like history, while moments of human hurt are punctuated as sharp reminders of the brutality of execution instead of emancipation ... The absurdist reality that Howe envisions offers a more accurate history of the United States and a more honest assessment of President Lincoln’s legacy than most textbooks do ... Savage Conversations posits an America whose collective insanity allows for the eradication of communities, the rewriting of shameful narratives, and the heroizing of villains.
Read Full Review >>
Rave Kathryn Nuernberger,
Kenyon Review
The story is a reckoning of hauntings and unprosecuted crimes, an attempt at imagining some way to live with an unbearable history of human rights abuses and genocide. Among the many rhetorical and craft techniques worthy of praise in Howe’s writing is her insightful and deft use of dramatic monologues ... Howe challenges narratives of innocence surrounding white female fragility and instead considers the agency of a First Lady ... A particularly powerful element in this collection is the character of the noose, who hangs at the periphery of these conversations, commenting in brief but disturbing reminders of the terrible history unfolding around the purgatory where Mary Todd Lincoln and Savage Indian find themselves ... The footnotes are formal innovations that enrich and provide powerful historical context to the body of the poems. Other formal innovations, that are equally effective and affecting, include descriptions of images one might find in a museum ... Howe’s readers receive a symbolic testament to the limitations of what so many Americans are willing to see and know.
Read Full Review >>
See All Reviews >>
SIMILAR BOOKS
Coming Soon

A Trail of Crab Tracks
Patrice Nganang
Positive
What did you think of Savage Conversations?
© LitHub | Privacy