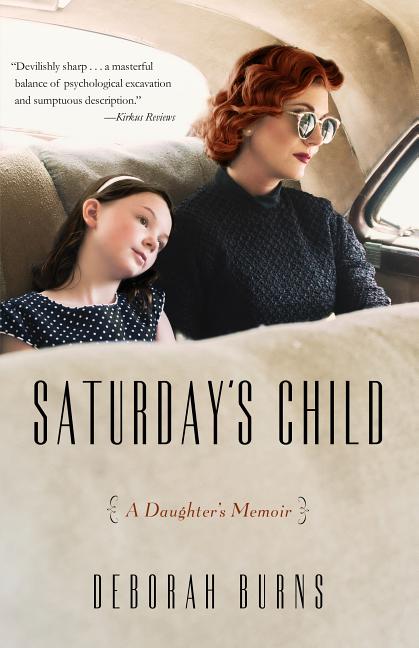 A lyrical memoir that chronicles the childhood of author Deborah Burns, who grew up in prim 1950s America in the shadow of a beautiful, unconventional, rule-breaking mother, as well as her quest in midlife to unravel her mother's secrets and reclaim her own identity.

What The Reviewers Say
Positive Aimee Jodoin,
Foreword Reviews
More than a memoir, Deborah Burns’s Saturday’s Child is a tribute to her mother Dotty, a powerhouse of a woman whose role in Burns’s life is conveyed in expressive prose ... Important scenes are captured in thorough, enchanting detail. Other details—such as that Burns began writing the book when she was the same age that her mother was when she died—draw clear-minded connections ... The book’s language is eloquent, and narrative techniques including cliffhangers and suspense help the story to unfurl. Dotty is a compelling character. Pertinent descriptions articulate people’s natures in few, precise words ... a memoir that recalls a difficult mother-daughter relationship; its cathartic tone is sympathetic.
Read Full Review >>
Positive Bridget Thoreson,
Booklist
Poignant and absorbing, Saturday’s Child carefully examines how a daughter’s childhood obsession became a more complicated reckoning with her mother’s secrets.
Read Full Review >>
Positive Kirkus
[Burns] is a devilishly sharp writer who achieves a masterful balance of psychological excavation and sumptuous description ... However, when it comes to her mother, she rarely moves beyond her image of her as a 'goddess' ... the most affecting aspect of this memoir is how the author is liberated by confronting her idealized perception of her parent while remaining tender to her memory ... A profound, searching remembrance that explores a complex family bond.
Read Full Review >>
See All Reviews >>
What did you think of Saturday's Child: A Daughter's Memoir?
© LitHub | Privacy