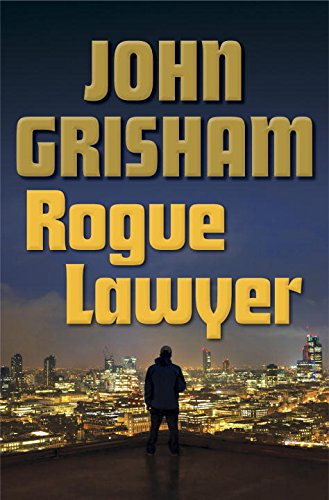 The latest legal thriller from John Grisham, focusing on a young street lawyer who defends the people that other lawyers won't go near.

What The Reviewers Say
Rave Benjamin Percy,
The New York Times Book Review
Sebastian Rudd is a kind of social justice warrior, and Grisham uses him to take jabs at the legal system. He points out the mass incarceration of black men. He dresses down trigger-happy cops who come armed with tanks and assault rifles. He damns the judges and district attorneys who want to secure their legacy, even if that means putting away the wrong person. And this is all expressed with a blunt, rude, gravelly poetic wiseguy voice that makes Rudd come across as a kind of 21st-century Philip Marlowe ... Rogue Lawyer bears more resemblance to some of the best serial narratives on television. In a few years, if it shows up on FX or HBO, I’ll be the first to tune in, just as I’ll be the first to pick up any future novels starring Rudd.
Read Full Review >>
Rave Maureen Corrigan,
The Washington Post
Rogue Lawyer is so cleverly plotted, it could be used as a how-to manual in fiction-writing courses. Its opening chapters are self-contained, giving the impression that this will be a collection of short legal suspense stories, rather than a novel ... It’s a mark of just how fleet-footed and inventive Rogue Lawyer is to say that the Gardy trial — which is pretty suspenseful — is the weakest story line in the novel.
Read Full Review >>
Pan Charles Finch,
USA Today
Rudd is supposed to be one of those superficially unlikeable heroes we end up loving. Instead he’s just…unlikeable ... [Rogue Lawyer characters are not paper-thin, because paper is as thick as a thick, juicy steak compared to them ... Even by Grisham’s inconsistent standards, Rogue Lawyer is a weak novel. And yet I couldn’t stop reading it. That’s because of the quality that saves Grisham from himself again and again, which is how relentlessly interesting he is when he’s writing about the law. Each of Rudd’s clients, from the victim of a raid by an absurdly militarized police team to a death row inmate trying to beat the needle, showcases the author’s magical trait, which is his ability to find intense drama in the little skirmishes that play out across our legal system every day.
Read Full Review >>
See All Reviews >>
SIMILAR BOOKS
Fiction

The Devil Takes You Home
Gabino Iglesias
Positive
What did you think of Rogue Lawyer?
© LitHub | Privacy