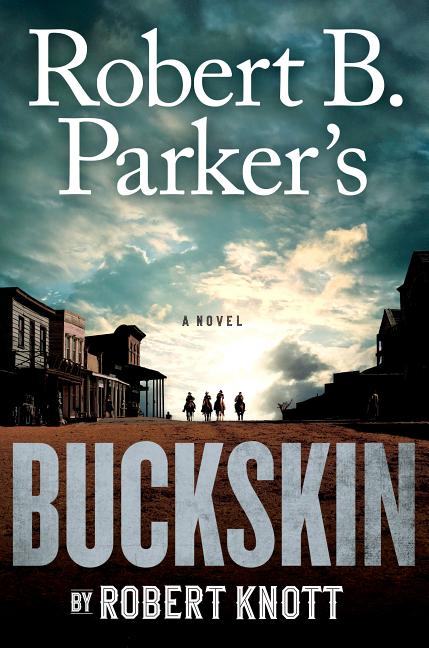 When gold is discovered in the foothills just outside of Appaloosa, it sets off a fight between two shrewd local business operations as their hired gun hands square off over the claim. Lawmen Virgil Cole and Everett Hitch must prevent all-out war between rival factions in the latest adventure in the New York Times-bestselling series.

What The Reviewers Say
Rave Joe Hartlaub,
BookReporter
... one of the best books published in any genre so far this year ... has a bit of everything. There is sex, violence, thrills and mystery. Actually, there are a lot of mysteries ... As might be evident to longtime readers of the series, this latest entry is a bit more plot-driven than the earlier installments. However, the threads that weave their way through the book are interesting enough that no one should mind a bit. Even at that, Cole and Hitch stand large enough in the goings-on that there is no danger of them disappearing in the mix ... Pick up Buckskin and discover why this is one of the best series in genre fiction.
Read Full Review >>
Positive Wes Lukowsky,
Booklist
Knott ups his game with every entry he contributes to the Cole-Hitch series. The dialogue is sharper, the plotting more complex, and Knott is mastering Parker’s spare style. Very entertaining reading for western fans.
Read Full Review >>
Mixed The Real Book Spy
Robert Knott is a talented writer, but there’s no doubt that these books won’t appeal to everyone. It’s not a stretch to suggest that only those with the strongest desires to explore the old Wild West will enjoy this book, but the same could be said for the rest of the franchise as well. The problem here is that the first act of the story is pretty slow, even by old west standards, and if you don’t find the squabble between Baptiste and McCormick interesting and engaging (which it’s not very, as both men whine and plead with Cole and Hitch to do something about the other), then there’s very little reason to continue onward into the book’s middle pages, which do heat up ... while longtime readers will likely enjoy another ride through Appaloosa with their two heroes, the slower plot and lack of suspense early on makes this one a bit of an acquired taste.
Read Full Review >>
See All Reviews >>
SIMILAR BOOKS
Fiction

The Devil Takes You Home
Gabino Iglesias
Positive
What did you think of Robert B. Parker's Buckskin?
© LitHub | Privacy