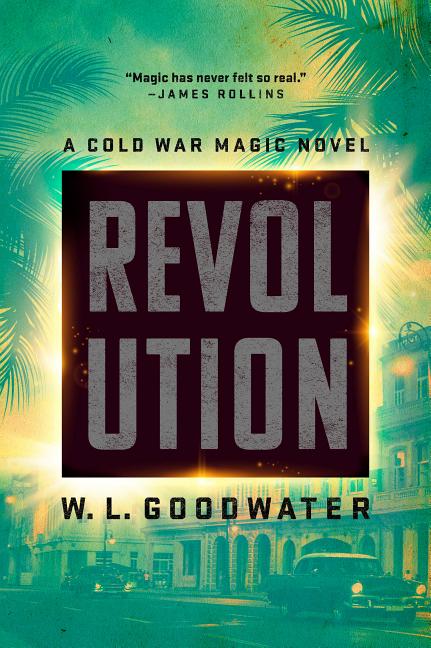 In the second novel in a Cold War fantasy series, American magician Karen O'Neil travels to Cuba to find a missing young girl intertwined with a new kind of magic that threatens to upend the balance of power of the whole world.

What The Reviewers Say
Positive Noah Fram,
BookPage
It would be easy, perhaps, to draw an analogy between Goodwater’s magically infused Cold War and other arcanely altered histories. Historical fiction with a dash of magicians is increasingly common, as evidenced by books authored by such luminaries as Susanna Clarke, China Mieville and Guy Gavriel Kay. Revolution falls squarely in this domain, but unlike the work of those writers, it is defined almost wholly by its taut, compelling plot, rather than by stylistic elements like Clarke’s flowery, Austenesque prose. Goodwater’s writing is direct and efficient, ideally suited to the thrillers he crafts, and adroitly gets out of its own way to allow the story itself to shine through ... Karen O’Neil’s travails in Cuba are great fun, bringing to mind an Indiana Jones adventure with a little more moral ambiguity, a lot more incantations and much stronger female characters. Without exception, the women are smart, capable and independent, while the men tend towards greedy, corrupt or inept, which is a more than welcome change from the genre’s status quo ... Goodwater’s ventures into Spanish names and dialogue leave some verisimilitude behind, but this is a quibble, and does not distract from the book’s overall narrative drive.
Read Full Review >>
Positive Terri Lent,
Library Journal
This supernatural spy thriller can easily be read as a stand-alone and hits all the right notes. The fun and thrilling fantasy/thriller mashup will remind readers of Jim Butcher or Lev Grossman with a little Robert Ludlum or John le Carré thrown in.
Read Full Review >>
Positive Lucy Lockley,
Booklist
Goodwater channels a classic Cold War episode combining espionage and the supernatural to create a thrilling alternative version of events ... This fast-paced spy fantasy will entice history buffs and have series fans anticipating another installment.
Read Full Review >>
See All Reviews >>
SIMILAR BOOKS
Fantasy