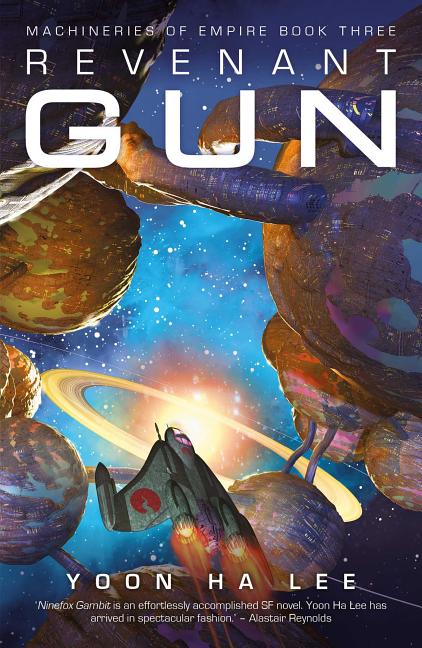 Shuos Jedao is awake... and nothing is as he remembers. He's a teenager, a cadet-a nobody-in the body of an old man; a general in command of an elite force. And he's the most feared, and reviled, man in the galaxy.

What The Reviewers Say
Rave Aidan Moher,
Tor
If you’ve paid any attention to the SFF Awards scene in recent years, you’ll recognize Yoon Ha Lee and his Machineries of Empire trilogy ... What started in Ninefox Gambit reaches its stunning conclusion in one of 2018’s best science fiction novels, and cements Lee alongside Leckie as one of science fiction’s foremost authors ... Much of the trilogy, but especially Revenant Gun, deals with Jedao trying to come to grips with his reputation and to reconcile his feelings about the massacre that made him a monster in the eyes of the Hexarchate ... Confined to a single novel, where he would have been defined by a singular character trait, would have oversimplified Jedao’s arc . Instead we’ve had the pleasure of spending three novels delving into Jedao not only as a brilliant tactician, but also as a conflicted, broken person ... The way Lee juggles the varied and conflicted elements of Jedao’s personality is nothing short of masterful.
Read Full Review >>
Rave Liz Bourke,
The Locus
Yoon Ha Lee’s (excellent) Machineries of Empire trilogy...is an untraditional sort of trilogy: while all of the volumes continue the same story, they do so with different approaches and different major characters ... where Ninefox Gambit, the first book, focused on Kel Cheris, a mathematically talented military officer in the autocracy known as the hexarchate, Raven Stratagem, the second book, involved a much wider cast of characters and never returned to Cheris’s viewpoint. ...Revenant Gun takes place a decade later, after Cheris’s success in her goal of overthrowing the hexarchate. Well, mostly success ... Revenant Gun is a fast, gripping story. Its shifting viewpoints – all seeing some part of the picture, none with a complete view or good insight into other people’s motivations – and potential for betrayals make it feel complex and demanding. At base, though, it’s a thriller crossed with a story about learning to live with consequences you didn’t choose ... I really enjoyed Revenant Gun, and I sincerely hope that Lee has the opportunity to write many more novels. This is excellent space opera, and I wish there were more like it.
Read Full Review >>
Rave Nicasio Andres Reed,
The Strange Horizon
Revenant Gun is a great book. I liked it a whole lot. (I immediately added it to my 'favorites' shelf on Goodreads, a tier occupied by only twenty-four titles, two of which are the previous two books in this trilogy.) Yoon Ha Lee stuck the landing, and in doing so cemented that the Machineries of Empire series is one of the most ambitious and rewarding science fiction series in print ... So, yes, I loved Revenant Gun. I've treasured this trilogy, and am impressed at the ending Yoon Ha Lee accomplished. I am also very greedy, and glad to report that Lee has confirmed he's in the middle of writing a collection of short stories within the Machineries of Empire universe, one of which is set directly after Revenant Gun.
Read Full Review >>
See All Reviews >>
SIMILAR BOOKS
Fantasy

A Marvellous Light
Freya Marske
Rave
What did you think of Revenant Gun?
© LitHub | Privacy