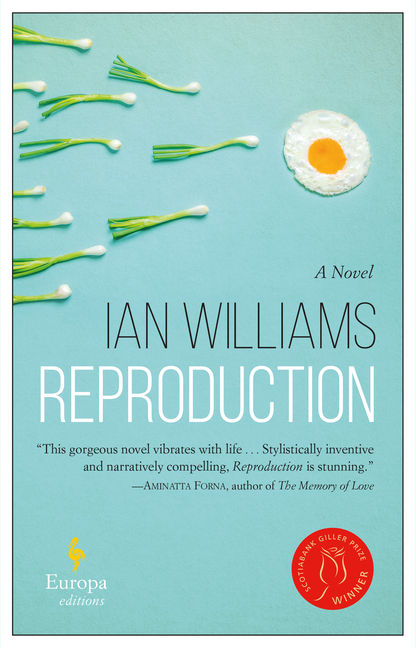 In this fist novel by the acclaimed Canadian poet and short-fiction writer, Felicia, a 19-year-old student from a West Indian family, and Edgar, the lazy-minded and impetuous heir of a wealthy German family, meet by chance when their ailing mothers are assigned the same hospital room. The odd-couple relationship between Edgar and Felicia, ripe with miscommunications, misunderstandings, and reprisals for perceived and real offenses, has some unexpected results.

What The Reviewers Say
Rave Chris Margeson,
Ottawa Review of Books
With Reproduction, Ian Williams has given us a book that is one-of-a-kind, a miraculously moving read, and an effortless recommendation ... an unconventional breath of fresh air. He shapes his sentences like silly putty ... and it’s this wildly creative language he uses, in Reproduction, to tell a beautiful, hilarious, and occasionally heart-breaking story about the way family shape our lives, for better or for worse ... Williams beautifully portrays an unconventional family dealing with many of the dramas of life that families, conventional or otherwise, often stumble into ... Even in the midst of its most convoluted relations and plot twists, Reproduction remains relatable, as moving as it is hilarious. Indeed, Williams’ guile is often in the way this sly, pervasive humour serves as a kind of Trojan Horse, dismantling readers’ defences so that the moments of raw emotion hit harder. And it’s often at these moments that the real tenderness of Reproduction shines through[.]
Read Full Review >>
Mixed Stephen Kearse,
The New York Times Book Review
... takes its structure from the organizing principles of cells and chromosomes: As characters reproduce, perspectives multiply and propagate, too, producing symmetries across generations and families. And, just as cells do over time, the novel’s form begins to break down, mutate ... Williams’s imaginative, intricate tapestries are dazzling, but the story sometimes feels narrow and deterministic. Few of the characters have attachments beyond the principal cast, and those who do downplay them in ways that feel artificial ... is at its best when Williams’s ornate arrangements of life and death feel fragile and unpredictable. He excels at transferring the intensity and action of traumatic events to the doldrums between: phone calls, haircuts, waiting rooms, car rides. In his rich probes of language and intimacy, legacy and inheritance, he slyly shows that reproduction is consequential, but so is everything else.
Read Full Review >>
Positive Rayyan Al-Shawaf,
Toronto Star
Reproduction, a novel by Ian Williams, manages to be witty, playful, and disarmingly offbeat—even as it hums with serious themes. The author proves unable to sustain this winning combination until the end, but by then has long since succeeded in fashioning a sharp and engaging tale out of the thinnest of conceits ... In the story’s final section, set in the present day, Williams, perhaps anxious to bolster its dramatic credentials, unwisely opts for a heavy-handed approach. Heavy-handed and (deliberately) circular ... Don’t despair. Latter-stage ponderousness aside, Reproduction maintains a brisk pace and a light touch. That’s quite a feat when you realize the extent to which the story wrestles with pressing social issues ... it is a mirror with graffiti/social commentary both humourous and powerful scrawled all over it.
Read Full Review >>
See All Reviews >>
SIMILAR BOOKS
Coming Soon

The Escapement
Lavie Tidhar
Rave
What did you think of Reproduction?
© LitHub | Privacy