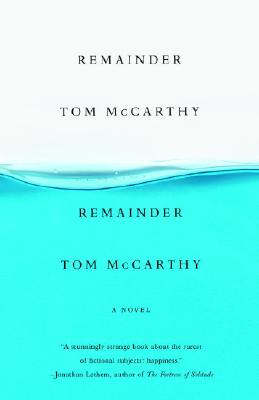 After a man is severely injured in a mysterious accident, an ordinary sight sets off a series of bizarre visions he can’t quite place and he sets off to bring these visions to life.

What The Reviewers Say
Rave Lenora Todaro,
Bookforum
The novel, McCarthy's first, is a tightly knit, suspenseful, and cold book about disconnection (induced by posttraumatic stress and, to some degree, consumer culture), with echoes of Huysmans and Heidegger. Nihilistically modern and classically structured, Remainder, set in contemporary London, presents a vision of extravagance in which one man, in an effort to ward off a life lived 'second-hand,' pursues authenticity with the monomaniacal focus of Francis Ford Coppola circa Apocalypse Now … McCarthy tells his tale calmly, as if taking long, yogic breaths. His everyman's struggle to regain his grace butts up against his fascination with systems and connections, which he sees magnified everywhere around him yet never within himself … McCarthy avoids the sophomoric. He seems genuinely to want to understand how a traumatized mind might put its broken pieces back together again.
Read Full Review >>
Rave Zadie Smith,
The New York Review of Books
When we write about lyrical Realism our great tool is the quote, so richly patterned. But Remainder is not filled with pretty quotes; it works by accumulation and repetition, closing in on its subject in ever-decreasing revolutions, like a trauma victim circling the blank horror of the traumatic event. It plays a long, meticulous game … Remainder’s way turns out to be an extreme form of dialectical materialism—it’s a book about a man who builds in order to feel … Remainder recognizes, with Szymborska’s poem, that we know, in the end, ‘less than little/And finally as little as nothing,’ and so tries always to acknowledge the void that is not ours, the messy remainder we can’t understand or control—the ultimate marker of which is Death itself.
Read Full Review >>
Positive Joyce Carol Oates,
The New York Review of Books
Remainder is a variant of that cruel fairy tale in which the most fantastic of wishes-come-true soon turn deadly. By degrees the reader comes to see that McCarthy’s amnesiac figure is a ‘remainder’—something that has been left over, in Jean-Paul Sartre’s term de trop, something that has got ‘in the way’ (see the climactic episode of Nausea, seemingly an influence on McCarthy). The fragmented and depressingly banal world he laboriously reconstructs out of a fleeting sensation of déjà vu is a mere remainder of a formerly living, vital world … Remainder is a novel that may appeal primarily to readers with interests in philosophy and the world of contemporary art, but McCarthy has written an inspired airborne ending.
Read Full Review >>
See All Reviews >>
SIMILAR BOOKS
Fiction

Kaleidoscope
Cecily Wong
Rave
What did you think of Remainder?
© LitHub | Privacy