Record of a Spaceborn Few 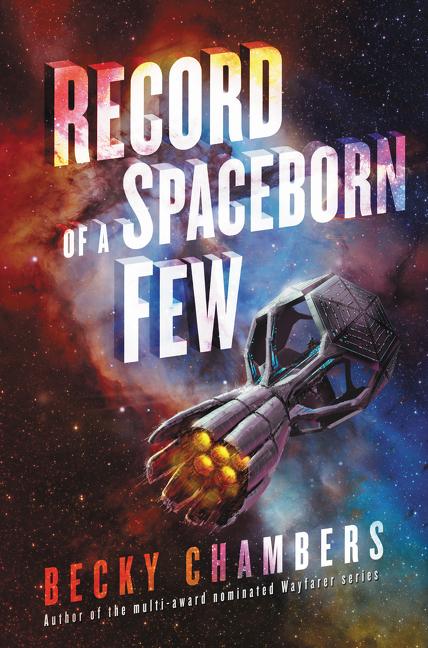 Return to the sprawling universe of the Galactic Commons, as humans, artificial intelligence, aliens, and some beings yet undiscovered explore what it means to be a community in the third adventure in the multi-award-nominated science fiction Wayfarers series.

What The Reviewers Say
Rave Annette Lapointe,
The New York Journal of Books
As a sub-genre, space opera is generally treated as a tired and over-wrought remnant from an earlier era. In her Wayfarers series, Becky Chambers demonstrates that the field still has enormous potential. Each book quietly realized that potential in a different manner ... all Chambers’ characters are complex and fully-realized. Most, as in her previous books, are female. That gender dominance never feels political or contrived. Rather, those characters allow us to view aspects of a 'spaceborn' society that are usually erased by space opera’s traditionally masculine focus. Sexuality, family, child-rearing, social relationships, and cultural continuity are not only women’s issues, but they do involve women. Female perspectives allow a complex social drama that includes private life as well as public ... Chambers’ thoughtful, measured work is offers space opera the depth and complexity it so often lacks. Her work is profound, engaging, and beautifully written.
Read Full Review >>
Positive Niall Alexander,
Tor.com
... the most hectic episode of the Wayfarers series so far ... regrettably, isn’t going to win over anyone who’s been underwhelmed by these books before. Indeed, it’s never been clearer than it is here that this is a series about people—people as opposed to the things that happen to them, assuming anything happens to them at all. To be sure, a few things do in Record of a Spaceborn Few—there’s a tragic mishap at the outset, and an equally disastrous accident as the text progresses—but the third of Chambers’ loosely-connected Wayfarers works is only interested in events insofar as these events affect the five folks that are the focus of this practically pacific work of fiction ... Chambers is succinct, and sensitive. What happens to Sawyer happens, but its principal purpose isn’t to excite or even to intrigue. Instead, it acts as a rallying cry that motivates Chambers’ credible and compassionately-crafted cast of characters to take full account of their respective futures ... If you’re looking for a story stuffed full of substance, with sex and space battles and betrayals, Record of a Spaceborn Few really isn’t the book for you, but if the idea of a near silent and not at all violent novel about decent people in relatively difficult situations trying to do what’s right for them right then appeals—in other words, if you’ve enjoyed the Wayfarers series in the past—then Becky Chambers’ latest may well be the purest distillation of her characteristically smooth science fiction to date.
Read Full Review >>
Rave Publishers Weekly
The multiple narrators and seemingly unrelated plot lines converge thematically into an intensely powerful and multifaceted meditation on time, history, change, and memory, leavened with a welcome touch of humor. The characters are distinct and lovable, each shedding light on a different facet of the Fleet. Chambers uses the interconnections inevitable in such a small society to provide moments of both horrific pain and soaring grace, and to make it clear that those things are inextricably intermingled. This is a superb work from one of the genre’s rising stars.
Read Full Review >>
See All Reviews >>
SIMILAR BOOKS
Fantasy

A Marvellous Light
Freya Marske
Rave
What did you think of Record of a Spaceborn Few?
© LitHub | Privacy