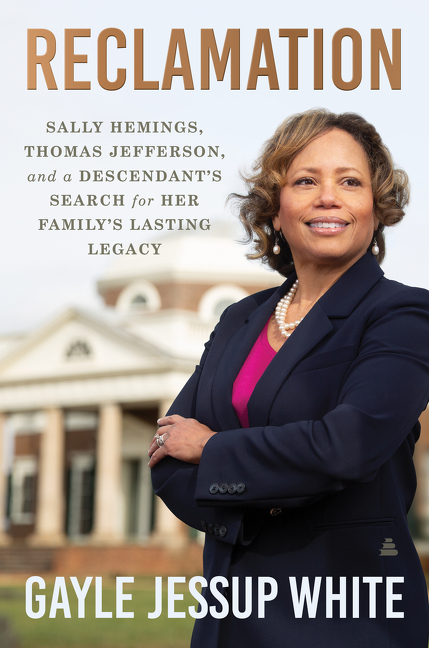 Gayle Jessup White had long heard the stories passed down from her father's family that they were direct descendants of Thomas Jefferson—lore she firmly believed. For four decades the journalist and genealogy enthusiast researched her connection to Thomas Jefferson. After she was named a Jefferson Studies Fellow, Jessup White discovered her family lore was correct. Poring through photos and documents and pursuing DNA evidence, she learned that not only was she a descendant of Jefferson on his father's side, she was also the great-great-great-granddaughter of Peter Hemings, Sally Hemings's brother. In Reclamation she chronicles her journey to definitively understand her heritage and reclaim it and offers a portrait of what it means to be a Black woman in America, to pursue the American dream, to reconcile the legacy of racism, and to ensure the nation lives up to the ideals advocated by her legendary ancestor.

What The Reviewers Say
Positive Darryl Robertson,
USA Today
... meticulous research ... Reclamation flourishes in bringing a new generation of Heminges and Jeffersons out of the shadows. But more importantly, this forceful piece of micro-history builds on the brilliant and breathtaking scholarship of Annette Gordon-Reed’s The Hemingses of Monticello: An American Family while adding a sturdy stone onto America’s shaky blueprint.
Read Full Review >>
Positive BoDean Warnock,
Booklist
This timely, relevant, and important book should find a home with readers interested in American ancestry as well as those seeking information about Jefferson and Sally Hemmings and the history of slavery in the U.S.
Read Full Review >>
Positive Alden Mudge,
BookPage
Multilayered ... The long process White went through to establish her lineage will be especially interesting to amateur genealogists. But it is also of great interest in general because of the subtle and not-so-subtle obstacles she faced as a Black person claiming to be a descendant of the author of the Declaration of Independence.
Read Full Review >>
See All Reviews >>
What did you think of Reclamation: Sally Hemings, Thomas Jefferson, and a Descendant's Search for Her Family's Lasting Legacy?
© LitHub | Privacy