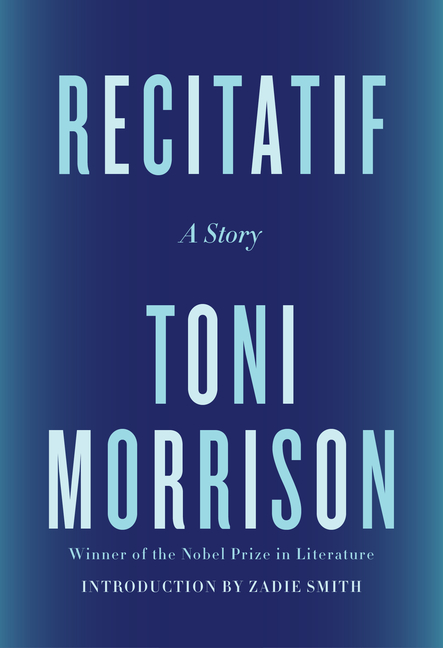 The Nobel laureate's only short story, which appeared in 1983, is now a book. Designed as a literary experiment, the tale removes all racial codes from a narrative about two poor girls who meet at a shelter and, after a time apart, at various points throughout their adult lives.

What The Reviewers Say
Rave Honorée Fanonne Jeffers,
The New York Times Book Review
Morrison’s unflustered logic is what I love about Recitatif ... when I went back to Recitatif some 25 years after my first read, it was clear that Morrison expertly used racial codes as a shell game: You never can find the prize. After a third and fourth read, I remain confused. Frankly, I like it that way ... When I return to Recitatif, it is with a renewed understanding that, along with a handful of other African Americans, Morrison was among the first to depict Black culture while also considering politics, while also considering United States history, while also considering white supremacy, while also considering economic class, while also considering gender, while also considering intergenerational trauma.
Read Full Review >>
Rave Heller McAlpin,
The Christian Science Monitor
Toni Morrison wrote just one stand-alone short story in her career, and page for page, it is as powerful and audacious an exploration of racial bias in America as her 11 novels ... What happens is profoundly thought-provoking. Even four decades after this story was written, readers are ineluctably drawn into a quandary about which character is white and which is Black. But here’s the brilliance of Morrison’s experiment: Each conjecture exposes the reader’s own racial preconceptions ... a shrewd feat of composition and social commentary ... Its short length would make it an ideal, accessible selection for book groups and community-wide reading programs, sure to spark self-scrutiny and discussion. Both timely and timeless, it’s a story I can’t recommend highly enough.
Read Full Review >>
Rave Zadie Smith,
The New Yorker
Much of the mesmerizing power of Recitatif lies in that first definition of 'peculiar to': that which characterizes. As readers, we urgently want to characterize the various characteristics on display ... [it contains] one of the most stunning paragraphs in all of Morrison’s work. The psychological subtlety of it. The mix of projection, vicarious action, self-justification, sadistic pleasure, and personal trauma that she identifies as a motivating force within Twyla, and that, by extrapolation, she prompts us to recognize in ourselves ... Morrison wants us ashamed of how we treat the powerless, even if we, too, feel powerless. And one of the ethical complexities of Recitatif is the uncomfortable fact that even as Twyla and Roberta fight to assert their own identities—the fact that they are both 'somebody'—they simultaneously cast others into the role of nobodies ... Morrison...could parse the difference between the deadness of a determining category and the richness of a lived experience. And there are some clues in this story, I think. Some hints at alternative ways of conceptualizing difference without either erasing or codifying it ... Morrison is the great master of American complexity, and Recitatif, in my view, sits alongside 'Bartleby, the Scrivener' and 'The Lottery' as a perfect—and perfectly American—tale, one every American child should read.
Read Full Review >>
See All Reviews >>
SIMILAR BOOKS
Fiction

Kaleidoscope
Cecily Wong
Rave
What did you think of Recitatif: A Story?
© LitHub | Privacy