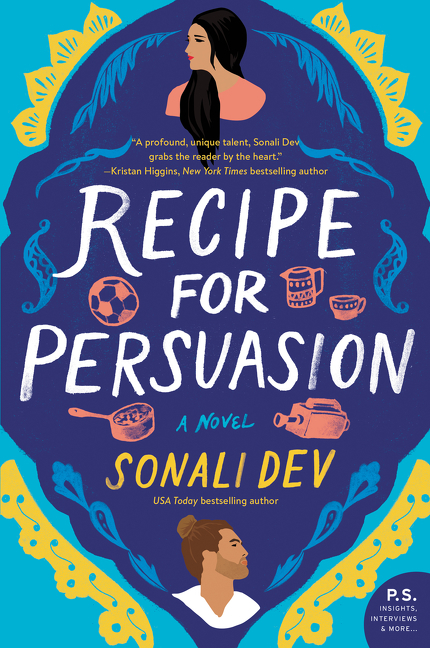 A traumatized Indian American chef is pushed over the edge when she reencounters her teenage love in this modern-day interpretation of Jane Austen's Persuasion.

What The Reviewers Say
Positive Kristen Yee,
Asian Review of Books
Loosely inspired by Jane Austen’s Persuasion, Sonali Dev’s new book is enriched with culinary allusions, replete with the aromas of tea and spice and based in a modern South Asian family (of royal lineage), as was her prior Austen revamp ... Dev deliciously conjures up the meals Ashna and Rico work on, and make the reader long for a custom tea blend as she seems to have for each dear person in her life, and occasion ... Aside from minor slips...Dev’s latest book is an appetizing delight.
Read Full Review >>
Positive Kirkus
As Ashna's story unravels alongside her mother's, the novel deftly unpacks some of the ways in which Indian women's experiences of oppression have changed with time, though Dev details Shoban's crusade against patriarchy with much more empathy and insight than her daughter's. The second installment in the Raje Family series...is ripe with an insider's understanding of Indian, specifically Maharashtrian, culture: luscious references to traditional food and attire jostle with bitter reminders of several deeply entrenched social and religious biases. As Dev swaps Austen's Regency England for aristocratic India, she credibly builds a world in which social privilege insulates upper-class and upper-caste men from the consequences of their actions ... An endearing romance that sensitively depicts the poignancy of loss and reconciliation.
Read Full Review >>
Rave Publishers Weekly
Dev continues the story of the Raje family...with this nuanced and powerful second chance romance, a loose riff on Jane Austen’s Persuasion ... The fast-paced world of reality TV makes for a fun backdrop as Ashna and Rico grapple with their feelings ... Dev balances the toe-curling romance with high-octane family drama, fleshing out Ashna’s strained relationship with her mother with touching flashbacks to her parents’ past. Dev’s candor and sensitivity in both story lines set this family-centric romance apart. Readers are sure to be impressed.
Read Full Review >>
See All Reviews >>
SIMILAR BOOKS
Fiction

How to Fail at Flirting
Denise Williams
Positive
What did you think of Recipe for Persuasion?
© LitHub | Privacy