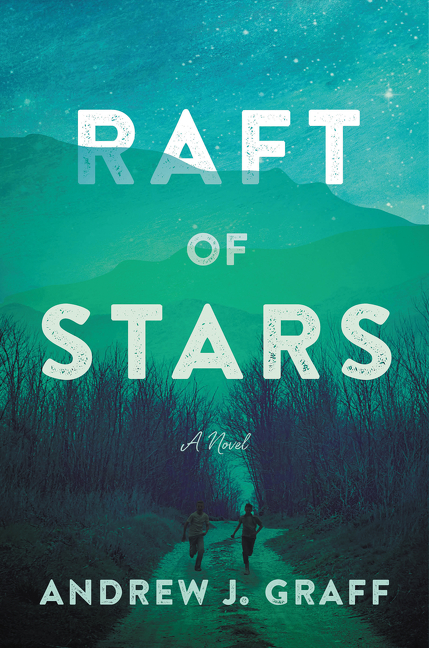 When two best friends in 1990s Wisconsin commit a troubling act and flee into the woods, a search party of four adults forms to find them. Through the boys' attempts to hide and the search party's hunt, all involved learn more about themselves and what it means to be human.

What The Reviewers Say
Rave Mark Athitakis,
The Washington Post
[Graff] wants to unravel some of the expectations of the genre. Nature, here, isn’t impressed with masculinity at all, and it’s prepared to smash machismo against its rocks along with anything else ... Before it delves into any of that, though, Raft of Stars comes on like an updated Huck Finn tale ... And though Stars isn’t an outright tragedy, there’s little in the way that feels triumphant. Mostly what the woods and river do are flatten our humanity into pure survival mode ... Graff writes exquisitely about the wilderness, both its dangers and the way its freedoms enchant the novel’s two prepubescent leads — the joy they find in building a raft and escaping capture is palpable ... Graff recognizes that his main job is to deliver a gripping adventure tale, which the concluding chapters offer plenty of — dangerous rapids leading to life-threatening waterfalls, menacing black bears and coyotes ... Untamed nature is bad news for humanity in general. But it’s always good news for adventure stories.
Read Full Review >>
Rave Sam Graham-Felsen,
The New York Times
Andrew J. Graff’s engrossing, largehearted debut novel, Raft of Stars, is a book with a distinctly Rousseauian vibe ... Graff, who is a veteran of the war in Afghanistan, depicts his battle-scarred heroes with knowing generosity. In spare and unpretentious prose, he shows how their hard lives have left them wary and emotionally knotted ... It is moments of quiet liberation [...] — not the rapid-fire action sequences, of which there are many — that quickened my pulse most.
Read Full Review >>
Rave Jeffrey Ann Goudie,
The Boston Globe
... [an] accomplished debut ... Nature is not mere backdrop here, but a rushing, thrummingly alive presence ... This novel is...romantic, but also compellingly real. And the art and craft of this narrative, apparent from the first page with its sublime constellations of images, offers brutal beauty, the glinting edge of truth, and the possibility of redemption for the fifth-grade boys, and also for the adults chasing them ... both children and adults show they can transcend the thicket of confusion surrounding their personal circumstances and emerge toward more clarity, proving they all are more than just 'poor damn things.'
Read Full Review >>
See All Reviews >>
SIMILAR BOOKS
Fiction

Mother May I
Joshilyn Jackson
Rave
What did you think of Raft of Stars?
© LitHub | Privacy