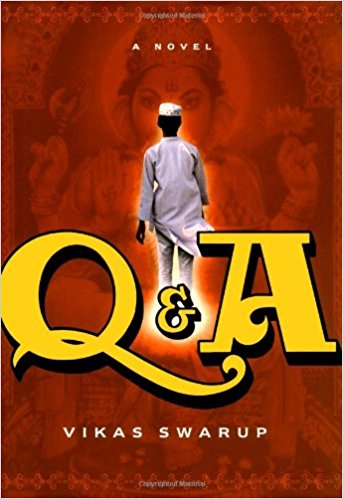 A novel that inspired award-winning film Slumdog Millionaire, Q & A is the story of Ram Mohammed Thomas, a poor orphan who has never been to school and somehow manages to correctly answer all twelve questions on India’s biggest quiz show.

What The Reviewers Say
Rave Iris Blasi,
BookPage
The debut novel of Indian diplomat Vikas Swarup, Q&A presents each of the 12 questions (neatly dealt with one at a time in the 12 chapters of the book) alongside the episode in Ram's life which explains how he knew the correct response … The events in Ram's amazing life are hard to believe. Yet, set against the colorful backdrop of modern India, they start to seem increasingly plausible while still no less extraordinary. Filled with a unique combination of humor, suspense and social commentary, Q&A is a fast-paced read which will leave you satisfyingly stunned.
Read Full Review >>
Mixed Elsa Dixler,
The New York Times Sunday Book Review
These picaresque adventures take place all over India. Along with Ram's ecumenical name, they suggest that our hero is meant to be an Indian Everyman. And he acts like one: although poor and uneducated, he is resourceful and wily. The connections between Ram's tales and the quiz-show questions are clever, but Swarup's prose is flat. Still, Swarup, an Indian diplomat and first-time novelist, writes humorously and keeps the surprises coming. When it is turned into the movie it wants to be, Q & A will be a delight.
Read Full Review >>
Mixed Ron Charles,
The Washington Post
Vikas Swarup provides a strange mixture of sweet and sour in this erratically comic novel … The theme here couldn't be any more obvious if Vanna White spelled it out for us, but what Q & A lacks in subtlety it makes up for in charm and melodrama. While Ram's interrogators are torturing him, a mysterious young defense attorney bursts into the cell and demands a private interview with her client. Almost the entire novel consists of their conversation … Through murders, robberies, rapes and close scrapes, Ram speaks in a voice that turns from wide-eyed innocence to moral outrage.
Read Full Review >>
See All Reviews >>
SIMILAR BOOKS
Coming Soon

Mount Chicago
Adam Levin
Mixed
What did you think of Q & A (Slumdog Millionaire)?
© LitHub | Privacy