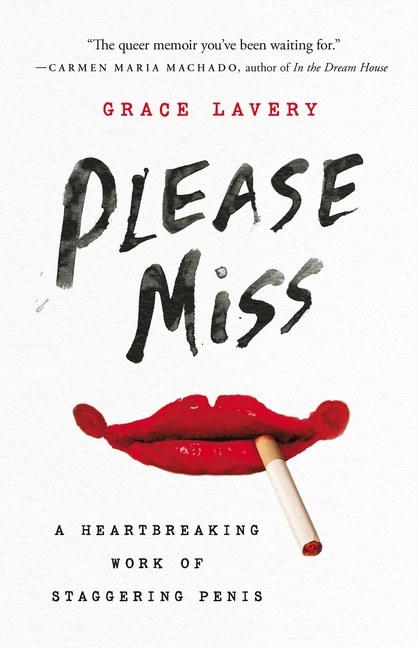 Grace Lavery is a reformed druggie, an unreformed omnisexual chaos Muppet, and 100 percent, all-natural, synthetic female hormone monster. As soon as she solves her "penis problem," she begins receiving anonymous letters, seemingly sent by a cult of sinister clowns, and sets out on a magical mystery tour to find the source of these surreal missives. Misadventures abound: Grace performs in a David Lynch remake of Sunset Boulevard and is reprogrammed as a sixties femmebot; she writes a Juggalo Ghostbusters prequel and a socialist manifesto disguised as a porn parody of a quiz show. Or is it vice versa? As Grace fumbles toward a new trans identity, she tries on dozens of different voices, creating a coat of many colors.

What The Reviewers Say
Rave Barry Pierce,
Irish Times (IRE)
Please Miss...happily sits within the current wave while simultaneously standing entirely on its own ... Not many books can so freely traverse between a sincere account of the author’s burgeoning descent into alcoholism and a genuine examination of how the musical Little Shop of Horrors is actually a trans narrative ... The most overarching presence in the book is Lavery’s humour ... Her worldview is as unique as it is deranged and you often feel as if you’re in the presence of that one friend who you know will guarantee you a wild and storied night out ... Lavery manages to find meaning and profundity in the most oblique of places ... Although the book’s structural messiness and lack of a narrative flow may be off-putting for some readers, I found such an approach to be pretty reflective of the journey that many trans people make. The story Lavery tells is messy, and thus the book should be regaled accordingly. Please Miss is a weird and wonderful work.
Read Full Review >>
Pan Sarah Ditum,
The Times (UK)
This is not a book that can be bothered with the niceties ... This is, of course, going to offend a lot of readers, especially the ones who believe that some trans women are co-opting female experiences for kicks ... The offence is the point: Lavery intends to provoke ... Lavery freely concedes that her history sets her apart from most women. Amid her biography as a boy and then a man, she clings to 'strange, multiple glints' that suggest femaleness to her ... You may object that being a woman is defined by more than sexy wees, being fetishised and being assaulted — and in fact, not defined by those things at all. But Lavery will not take you seriously. The other side of the debate is represented here in long parodies that are not as funny as they think they are ... A relentlessly non-standard memoir. Chronology is smashed up, genres are rifled, truth is very rarely the point ... But the fourth-wall breaking and self-referentiality gets tired fast ... Occasionally the pretentiousness lapses, and emotional honesty almost creeps in ... Such moments are fleeting, though. More typical are the tortured jaunts into criticism ... Whatever your gender politics, no amount of penis can make this bearable.
Read Full Review >>
Positive Publishers Weekly
A surreal speculative memoir that’s by turns engrossing and impenetrable ... Lavery aims to rub out the dividing line between the intellectual and the bawdy to subvert the typical transgender memoir ... It’s not the blurring of distinctions between fantasy and reality that clouds the book’s clarity, however, but Lavery’s deeply academic discourse; without a comprehensive knowledge of Dickens and Lacan, many readers will too often be left in the dark trying to decipher what it is Lavery is attempting to say. LGBTQ literati will find much to explore, but others may have more homework to do first.
Read Full Review >>
See All Reviews >>
What did you think of Please Miss: A Heartbreaking Work of Staggering Penis?
© LitHub | Privacy