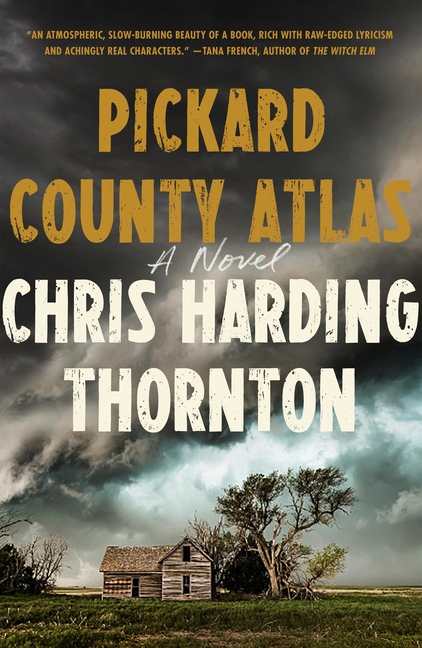 In a dusty town in Nebraska’s rugged sandhills, weary sheriff’s deputy Harley Jensen patrols the streets at night, on the lookout for something―anything―out of the ordinary. It’s July 1978, and the Reddick family patriarch has decided, decades after authorities ended the search for his murdered boy’s body, to lay a headstone. Instead of bringing closure, this decision is the spark that threatens to set Pickard County ablaze.

What The Reviewers Say
Rave SHEILA McCLEAR,
The Star Tribune
In this debut novel, Thornton has skillfully created a hyper-detailed setting of the Nebraska plains ... a gripping mixture of cop procedural and a psychological story of rebirth that gives one man the chance at leaving his past behind. Suspense builds as Harley realizes that redemption hides in the unlikeliest of places, and that the call is coming from inside the house — or in this case, a farmhouse on the edge of town.
Read Full Review >>
Positive G. Robert Frazier,
BookPage
Thornton unravels the intrigue and suspense in meticulously detailed fashion in her solid debut novel ... Homesteads—many of which have folded or been abandoned—stretch over hundreds of acres, a detail which Thornton cannily uses to evoke the isolation and lonely frustration that bears down upon the remaining residents ... takes its time; there is no real sense of urgency or high stakes confronting Harley or any of the other characters. The closest thing to a central mystery is the weird series of thefts and break-ins. But Thornton, herself a seventh-generation Nebraskan, describes the landscape and interactions of the characters in such starkly realistic detail, you cannot help but get wrapped up in the novel’s noirish atmosphere and slow-burning mystery.
Read Full Review >>
Positive Connor Goodwin,
The Seattle Times
Rick’s fall from grace is almost unbelievably swift, as if someone flipped a switch, in what is otherwise a well-paced, slow-burn psychological crime thriller ... Thornton leverages the constraints of small-town life to marvelous effect when ratcheting up dramatic tension. Despite being set in the Great Plains, this is a highly claustrophobic tale where unaired grievances and the smallness of small-town life sit on your chest and don’t let up ... Thornton herself is a seventh-generation Nebraskan, and this intimate familiarity shines through in vivid descriptions of hardscrabble life out in western Nebraska ... Thornton balances these lyrical descriptions of place and mood with snappy dialogue that effectively summons small-town shorthand — gruff greetings, hushed speculation, dry quips — which, alongside a steamy affair, grease the narrative and make for a quick read ... This thriller manages to grip readers in a bloodless fashion. Less a mystery than a psychological drama, Thornton presents readers with a convincing character study charting how quickly self-destructive tendencies can veer into full-on self-annihilation, and the many paths one can take to get there.
Read Full Review >>
See All Reviews >>
SIMILAR BOOKS
Fiction

Find You First
Linwood Barclay
Positive
What did you think of Pickard County Atlas?
© LitHub | Privacy