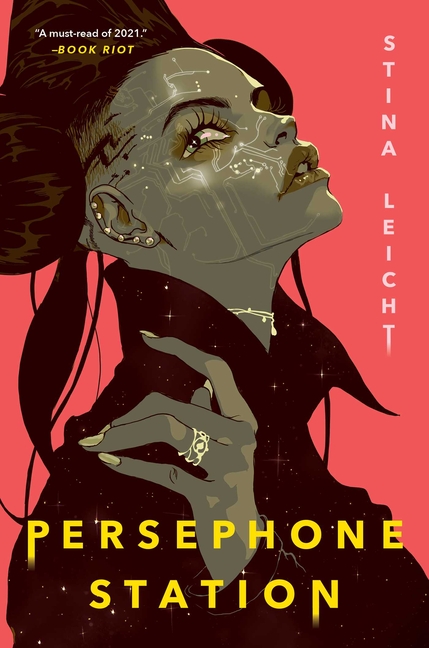 Persephone Station, a seemingly backwater planet that has largely been ignored by the United Republic of Worlds, becomes the focus for the Serrao-Orlov Corporation as the planet has a few secrets the corporation tenaciously wants to exploit.

What The Reviewers Say
Rave Alexandra Nae,
The Nerd Daily
With a striking cover, an intriguing plot, thrilling action, and a diverse cast, Persephone Station makes a great queer SFF read first thing in 2021! ... There were nonbinary characters, sapphic characters, and other gender-neutral characters all throughout the book. It may not seem much to some, but it was so delightful for me to see this kind of representation, especially in SFF ... As for the writing style, it was straightforward, and yet it also left mysteries for the readers here and there ... The plot of Persephone Station was certainly distinctive. I loved the plot twist in the end. My main problem would have to be the pacing. It was fast-paced and action-packed at the early parts of the book. After that, it kind of dwindled down in the middle ... When it comes to the worldbuilding, the author created something so vivid and expansive ... Overall, Persephone Station is a solid read, one that will whisk you away into space, on an alien planet, on a wild ride. Those who are looking for action and remarkable plot will adore this one.
Read Full Review >>
Positive Ralph Harris,
BookPage
Leicht takes influence from cyberpunk novels and Star Trek, pulling together an action-packed plot ... Persephone Station gathers narrative speed with all the grace of a snowball rolling downhill in an old cartoon, sliding and bounding from the moment our heroes find themselves in over their heads, which happens almost immediately ... Leicht has crafted a fully imagined world that functions like a living, breathing member of the story. Various aspects of the world beyond Persephone bleed into the story, but never in a way that feels cheap or unearned ... The highly likeable characters help balance Persephone Station’s erratic pacing ... a positive, entertaining story of grit and determination in which the will to do good prevails despite great cost.
Read Full Review >>
Mixed Jason Sheehan,
NPR
Stina Leicht is trying to do a lot with Persephone Station. She's trying to do a book that feels both weighty and light, both serious and fun, and for long stretches, she pulls off what is a very difficult balancing act. And while success would've been masterful, given the weight of all the different stories she's carrying, the falls and failures seem almost inevitable ... Leicht dumps a lot of background here — character backstories, corporate info, the histories of Rosie and Vissia. And I get it. This stuff has to go somewhere. It's not fluff (well, not most of it), and much of it becomes important later. But two things go wrong. First, after the thumping shocks of the opening, the middlegame happens in a kind of vacuum without propulsion and without stakes. You know all the main characters will survive this mid-point action because all of their plotlines have become so tangled that any resolution requires them all to make it to the end. Second, that neatly measured tempo established in the front of the book simply vanishes for a long, muddling stretch ... Most of this is okay. Most of it — even the squishy middle bit — is buoyed along by Leicht's talent for making characters you want to hang with just a little bit longer ... But of all the parts that make up Persephone Station — amid all the miniguns, explosions and robots — it's the four people in the center of it all that stitch it together. Even in the moments when it feels like it's coming apart at the seams.
Read Full Review >>
See All Reviews >>
SIMILAR BOOKS
Fantasy

The Helm of Midnight
Marina Lostetter
Positive
What did you think of Persephone Station?
© LitHub | Privacy