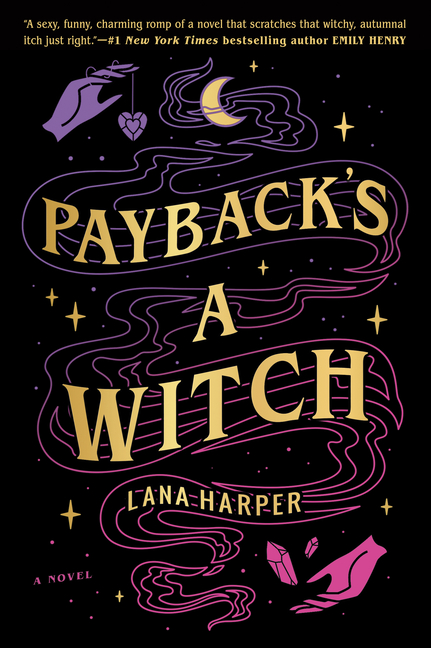 Emmy Harlow is a witch but not a very powerful one—in part because she hasn't been home to the magical town of Thistle Grove in years. Her self-imposed exile has a lot to do with a complicated family history and a desire to forge her own way in the world, and only the very tiniest bit to do with Gareth Blackmoore, heir to the most powerful magical family in town and casual breaker of hearts and destroyer of dreams.

What The Reviewers Say
Rave Anna G,
The Nerd Daily
... a charming and sweet novel ideal for the upcoming spooky season ... With relatable characters, a fun storyline, and some angsty romance, Payback’s A Witch will enchant you from the very first page. Even though the romance does play a big role in the story, it’s actually the witch tournament that becomes the center of this book, and the other subplots are just intertwined with it and help develop certain events in the story. The tournament itself spans over the course of a few days and it is actually so fun to read about ... In terms of the romance, it was refreshing to see that it avoids queer rom-com stereotypes, the relationship between Emmy and Talia feels very natural, with ups and downs and it also doesn’t feel too fast nor too slow. It really has a great development. There’s also quite a bit of angst but it’s well balanced with other tender moments and don’t we all love a bit of angst and slow burn! ... All in all, when you close the book, you’ll want to live in the bewitching town that is Thistle Grove. But since it’s only the first of the series, it’s good to know that readers will have the chance to revisit this magical autumnal town and its lovable characters when book two is released! Charming, sweet, and magical, Payback’s A Witch is the perfect book to enjoy on a cosy autumn night.
Read Full Review >>
Rave Eve Stano,
Library Journal
With a satisfying end to the tournament, and smart, funny characters who support one another, Harper’s series is off to a fantastic start. Highly recommended.
Read Full Review >>
Positive Diana Tixier Herald,
Booklist
YA writer Harper’s first adult romance offers an imaginative and intriguing portrayal of magic, and a bisexual female romance between Emmy and Talia, and launches the promising Witches of Thistle Grove series.
Read Full Review >>
See All Reviews >>
SIMILAR BOOKS
Fiction

The Summer Place
Jennifer Weiner
Rave
What did you think of Payback's a Witch?
© LitHub | Privacy