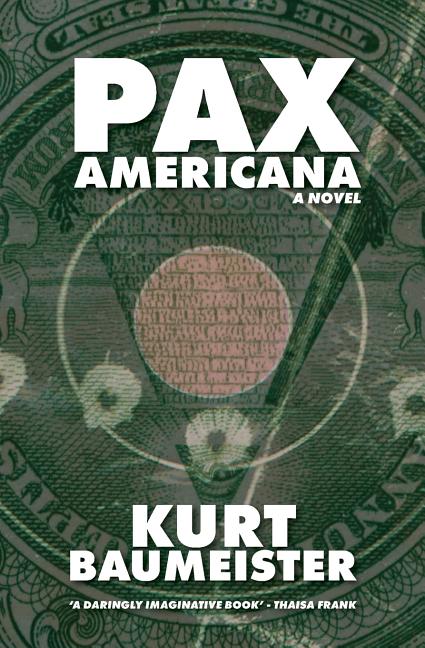 What The Reviewers Say
Rave Gabino Iglesias,
The Brooklyn Rail
...a strange hybrid narrative that weaves together a science fiction drama with a hilarious thriller and sprinkles the mixture with heavy doses of literary fiction, sociopolitical commentary, and satire. The result is an ambitious novel that somehow pulls it all off while demonstrating a level of creativity that can rarely be found in debuts ... Mixed in with this mayhem are a plethora of characters, healthy doses of humor, plenty of tension, and a sprawling narrative rich in political and religious undertones ... Despite the heavy ideas and touchy themes Baumeister juggles in Pax Americana, and the fact that it comes in at almost 400 pages, the narrative moves forward at breakneck speed and is as readable as a novella thanks mainly to two elements. The first is the author’s knack for dialogue ... The second is the diversity, humor, plausibility, and depth of backstories ... what ultimately makes Pax Americana feel timely and necessary is that it reflects an augmented, somewhat cartoonish version of the current political panorama while simultaneously playing with the possibilities of a parallel political history that might have stemmed from the real/fictional George W. Bush administration ... a true triumph.
Read Full Review >>
Positive John Domini,
Vol. 1 Brooklyn
The title of his bleak yet bubbly Pax Americana smacks of satire, but also sketches a power structure that doesn’t quite match up with our own ... As the novel works out its answers, it relies a bit much on dialogue, sometimes getting redundant when it strives to be snappy, and it falters a couple of times in its attempts to deepen character. By and large, however, Baumeister succeeds in delivering the deep chill he intends.
Read Full Review >>
Rave Janelizabeth Watson,
Electric Lit
Kurt Baumeister’s zestful, remorseless, clear-eyed debut novel Pax Americana bounds on to the scene at a time when its humor is not only welcome, but necessary. The plot and premise of Pax Americana reads a bit like a the sly wink of James Bond novel as directed by Tarantino at his most manic ... It takes a skillful satirist to elevate the buffoons to a level of humanity without losing his comic edge, and Pax Americana manages to strike this balance in an appealing way, with delightfully acrobatic shifts between the highbrow and the lowbrow ... a mad romp, utterly pleasurable and fun on one level while trenchant and recognizable on another ... This is terrific writing with an unpretentiously literate sensibility.
Read Full Review >>
See All Reviews >>
SIMILAR BOOKS
Coming Soon

On Java Road
Lawrence Osborne
Rave
What did you think of Pax Americana?
© LitHub | Privacy