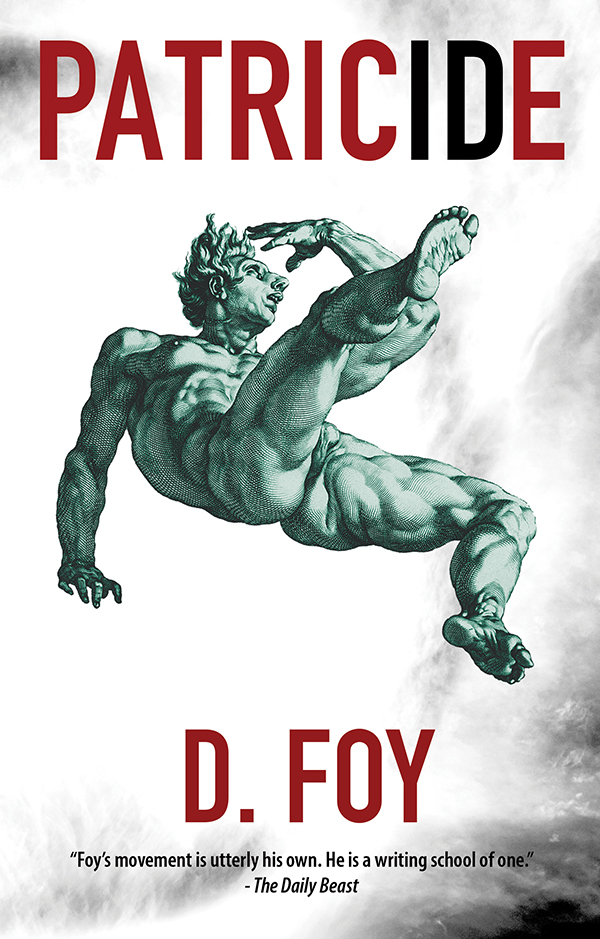 Beyond the story of a boy growing up in a family derailed by a hapless father, Patricide is a brutal search for meaning and identity within the strange secrecy of the family.
Positive
Based on 3 reviews

What The Reviewers Say
Rave Daulton Dickey,
The Rumpus
In a world where we heap praises on writers who focus on middle-class people with middle-class problems—Jennifer Egan, Donna Tartt, Jonathan Franzen, Michael Chabon, et al.—writers such as D. Foy, and novels such as Patricide, are rare, welcome, and refreshing. Tragedy and despair lurk beneath the surface of Patricide. Told in snapshots, the book chronicles the relationship between a boy and his parents. They’re thrust into poverty at birth, creating, and dealing with, destructive distractions. Their interfamilial relationship is complex, filled with hardships and turmoil, abuse and addiction—and D. Foy doesn’t flinch in telling it ... The tone is notable in its unflinching and unsentimental attitude. There are no sweeping moments here, no picaresque shots or moments of epiphany. Instead, Foy thrusts us into a raw and detached world, one free of ornamentation and contrived emotions. It’s a tone you’ll only encounter in writers who dominate their craft, writers confident and certain of their ability to create, and delve into, a bleak world. D. Foy’s characters feel like people you could meet in the real world. His prose is understated yet profound. Simple sentences and vocabulary call to mind Hemingway or McCarthy ... Told in concise, deceptively brilliant prose, Patricide is a breathtaking study of poverty, familial abuse, and the scars we pass along like defective genes. Patricide will get under your skin: it will haunt you, frustrate you, and, weirdly, inspire you. It’s less a novel and more of an experience. It’s a brilliantly conceived and executed book.
Read Full Review >>
Rave Gabino Iglesias,
Electric Literature
...an unusual hybrid that pushes against the edges of literary fiction with the unfiltered violence, frustration, and angst typically found in noir novels but does so with an elegance and lyricism that echo giants like Cormac McCarthy and Walt Whitman. Equal parts devastating coming-of-age (and beyond) narrative and philosophical examination of fatherhood, Patricide is, more than a novel about a man who survives a devastating, abusive childhood, a text that explores both identity construction/deconstruction/reconstruction cycles and the generational recurrence of aberrant behavioral patterns and falsehoods ... The result is a novel that digs deep into Americana and pulls out its most embarrassing, chaotic, tender, and scatological scenes and brings them to center stage so that they may, for one brief moment, shine so bright that they transform into mirrors ... Patricide delivers on that tough promise and cements its author as one of the most talented and polyrhythmic voices in literary fiction.
Read Full Review >>
Mixed Michael T. Fournier,
The Chicago Review of Books
""...there’s much more to this one than brutality for its own sake: fragmented reportage becomes something resembling cohesive redemption by its end ... The series of anecdotes and vignettes presented to us can be taken as standalones or as part of a bigger, messier whole, which we’re to understand may be colored by some combination of bias, inebriation, or simply the passage of time. Or trauma ... blood-and-guts details which are hard to look away from, fascinating like a car crash in their descriptive excess. But after a time they’re hard to read—the feelings become rote, the topic of ‘I hate my dad’ nestling up on the sizable pile of freshman fiction axe-grindings. Too often the titular patricide is a one-way street.""
Read Full Review >>
See All Reviews >>
SIMILAR BOOKS
Coming Soon

The Bartender's Cure
Wesley Straton
Mixed
What did you think of Patricide?
© LitHub | Privacy