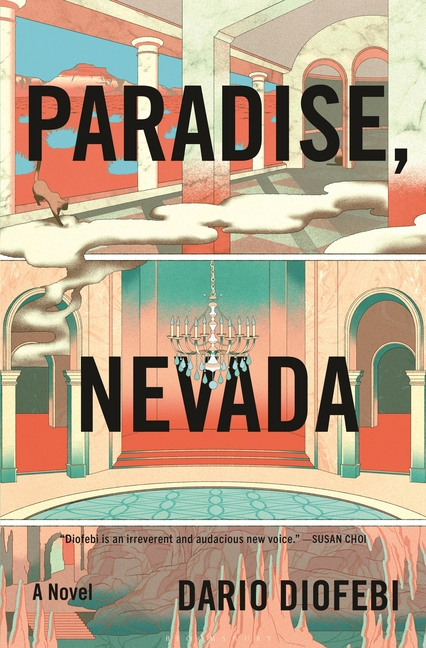 In this debut novel, a bomb detonates in the Positano Luxury Resort and Casino in Las Vegas. Six months earlier, a quartet of late twenty-something strivers had moved to town, only to find themselves caught up in backroom schemes for personal and political power in a fight for the soul of "Paradise."

What The Reviewers Say
Rave Robert Ham,
Foreword Reviews
... sprawling and colorful ... The novel ably bounces between these four narratives, while dozens of secondary characters weave into each, all moving, slow and steady, toward a climactic event. The novel’s rich details are both its allure and its occasional undoing. The motivations and inner struggles of the main quartet are palpable ... How each comes to terms with, or pushes against, these issues makes the book prescient and powerful. At the same time, the story is larded by extraneous information, as of the minutiae of poker play. That it still manages to pack a sizable punch is due to the strength and depth of its tart narrative. Sneaking sly wit and subtle profundities into its wide-ranging narrative, Paradise, Nevada is a wonderful saga that’s both reflective of, and critical of, our modern age.
Read Full Review >>
Rave Elizabeth Gonzalez James,
Ploughshares
... a sprawling Tolstoy-ian drama ... Part of the joy of the novel is watching how Las Vegas punishes or rewards the characters, how it helps or hinders them on their individual journeys ... The collision between Italy and America is sounded repeatedly in the novel, and some of Diofebi’s most beautiful writing happens when he meditates on poker player Tom’s former life in the shabby Roman suburbs ... There isn’t a single American who doesn’t hold a strong idea of what Las Vegas is, and I believe part of Diofebi’s undertaking in this novel was to show not only the soul of the city, but all the ways in which Las Vegas is imagined in the American consciousness. It is as though Diofebi dropped a dome on the city and meticulously cataloged all that he found. Tolstoy similarly set himself the task of capturing an entire world in his narratives ... To call Paradise, Nevada, then, a poker novel, or a thriller, or a bildungsroman, or a critique of the information economy, while all true, would miss so much. It is a novel that contains multitudes, with characters and places and history and future living inside the pages like Jorge Luis Borges’s fictional infinite tome from his short story The Book of Sand. Each character seems to contain more characters within; each location—Paris, Las Vegas, or a fictional recreation of the Shibuya crossing—functions in triplicate as character, metaphor, and critique. In order to capture something so elusive and grand as the soul of a city, perhaps this has to be the case. Or perhaps, because Las Vegas is the blinking, gyrating fantasy that it is, nothing can be taken for what it seems and everything must stand in for a larger idea. A half-scale model of the Eiffel Tower is either the low point of American mediocrity or a spectacularly maximalist homage, depending on who you ask. Diofebi presents both arguments in his novel, with the truth resting a foot on each side ... What Diofebi shows in his debut is all the thousands of machinations happening in the background, producing what is ultimately a glorious illusion.
Read Full Review >>
Positive Pete Tosiello,
The Washington Post
... a throwback to the sprawling 1990s systems novel on both a conceptual level and a sentence-for-sentence basis ... With a narrative whipsawing among four neurotic protagonists, Paradise, Nevada charts a collision course through the gaming industry, grappling with Vegas’s objectifying entertainment complex and accelerating tech sphere ... While Diofebi’s exposition and extensive footnotes owe a debt to Wallace’s work, his closest analogue is Tom Wolfe, whose breathless reporting and visual detail prompted critics to wonder why he bothered writing fiction at all. In Diofebi’s case, the conceit is clear enough — if anything, his characters feel too much like mouthpieces for his arguments, and not enough like people. The protagonists are earnest rubes, the antagonists villainous caricatures, and as in Wolfe’s best-selling tomes, the unlikely subplots thread into a fiery, calamitous climax ... It’s reductive to criticize such an ambitious debut for its length, but there’s a great little poker novel buried within Paradise, Nevada — one which, admittedly, would have been a harder sell to the literary presses. The book’s drama unfolds at the card table — the rivers, the flops, the risks and consequences — in a way that jolts adrenaline regardless of your familiarity with the game ... Diofebi’s scuzzy ambiance is delicately crafted, his scenes deftly taxonomizing tiers of desperate gamblers and casino staff like species in a field guide ... Diofebi is oddly wary of all the poker talk, frequently reminding us that Texas Hold ‘Em was a short-lived fad among unshaven young men. He needn’t apologize — it’s clear that he’s fascinated by these decadent Obama-era subcultures, and the book’s consideration of pickup artists and fraternity brothers is more compelling than his writing about the labor movement and the border crisis. He also displays a thorough understanding of the Mormon Church and its history, although his efforts to draw throughlines to our uneasy present often feel labored. Diofebi is a keen observer of power structures, and any one of these themes might have warranted a full book’s examination. Paradise, Nevada brims with big ideas, even if they don’t always cohere into a single systemic critique.
Read Full Review >>
See All Reviews >>
SIMILAR BOOKS
Fiction

The World and All That It Holds
Aleksandar Hemon
Rave
What did you think of Paradise, Nevada?
© LitHub | Privacy