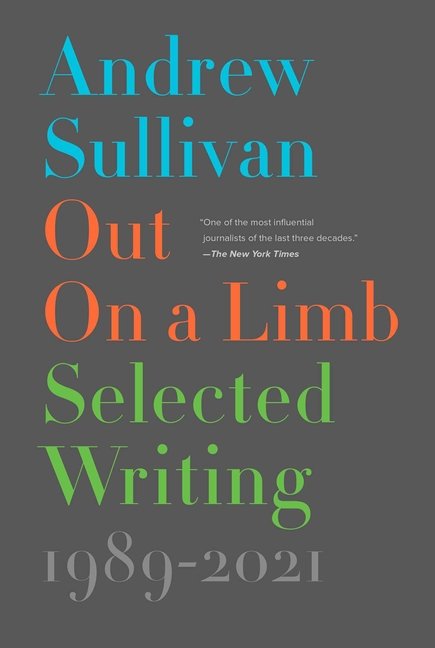 A collection of Andrew Sullivan's arguments on culture, politics, religion, and philosophy.

What The Reviewers Say
Rave David French,
New York Times Book Review
To call the book a mere 'collection of essays' is to do it a grave injustice. Perhaps it’s better to call it a series of journeys ... It’s hard for anyone to read Sullivan’s words and not feel provoked. However, he is no troll. He does not write for the purpose of inflicting pain. And even his most passionate arguments are thoughtfully delivered, deeply rooted in his philosophy and faith ... The last person to argue that Sullivan has always been right in both substance and tone is Sullivan himself. He puts his own mistakes on the page. He places them in his own curated collection of essays. It’s an act of remarkable humility in an age when humility is often derided as weakness ... Read it to better understand the many journeys of one of America’s most important public intellectuals. But most of all read this book to see what it looks like when a thoughtful man tries his best to tell the truth and let the chips fall where they may.
Read Full Review >>
Pan Dale Peck,
The Baffler
Making your way through the barrage of lies, half-truths, innuendoes, and provocations that characterize this 576-page miscellany of Sullivan’s career has all the appeal of plunging an overfull toilet: you just know shitty water’s going to soak the bathmat. … Sullivan, however, has spent the better part of forty years clinging to fantasies of a rational, compassionate conservatism ‘dedicated to criticizing liberalism’s failures, engaging with it empirically, and offering practical alternatives to the same problems’—as though this is a thing that has ever existed anywhere in the history of the world … At the beginning of this book you get the sense that Sullivan’s gaslighting his readers, but the deeper you go you start to wonder if he’s actually gaslighting himself … That’s right, folks: as many as a million people were killed in a pointless war that Andrew Sullivan hawked like a fishwife for no other reason than his need to punish as many Muslims as possible for 9/11, but what’s important to remember is that he feels really bad about it … he doesn’t realize his alienation stems from wanting to belong to clubs whose members hate him not for what he says or what he does but for what he is.
Read Full Review >>
Positive Kirkus
Trenchant observations from an influential journalist.
Read Full Review >>
See All Reviews >>
What did you think of Out on a Limb: Selected Writing, 1989-2021?
© LitHub | Privacy