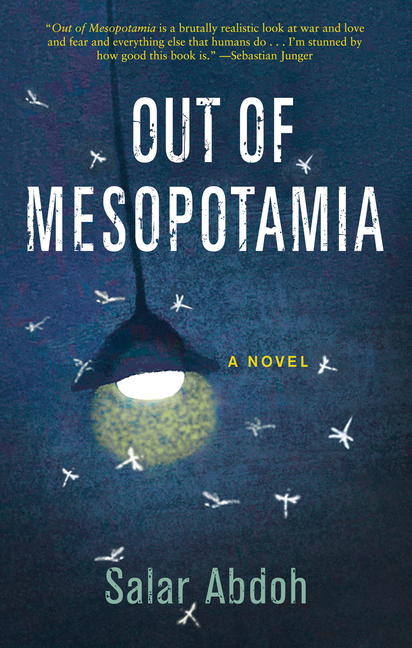 Saleh is a middle-aged Iranian journalist who moonlights as a writer for one of Iran's most popular TV shows but cannot keep himself away from the front lines in neighboring Iraq and Syria. There, the fight against the Islamic State is a proxy war, an existential battle, a declaration of faith, and, for some, a passing weekend affair as the "endless war" erases the boundaries separating everyday life from battle.

What The Reviewers Say
Positive Elliot Ackerman,
The New York Times Book Review
... as much a meditation on time and memory as it is a book about war ... These themes sound weighty, but the novel carries them lightly. Abdoh skillfully captures combat’s intrinsic absurdity ... For many Americans, the conflicts in Syria and Iraq have become abstractions, separated from our lives by geographic as well as psychic boundaries. Abdoh collapses these boundaries, presenting a disjointed reality in which war and everyday life are inextricably entwined ... The novel arrives at...wisdom by shining a brilliant, feverish light on the nature of not only modern war but all war, and even of life itself.
Read Full Review >>
Positive Lawrence Rungren,
Library Journal
Abdoh...explores the lives behind the war-torn headlines in a way that captures the full humanity of the participants. Channeling a bit of Tim O’Brien and a good deal of Joseph Heller, he has written the best novel to date on the Middle East’s ceaseless wars.
Read Full Review >>
Rave Bill Kelly,
Booklist
Descriptions of the show’s story line, which provide incisive and blistering commentaries on the conflict, also reveal essential truths about the nature of narrative, cultural politics, and history. The theme of memory is also threaded through the story as Saleh uncovers a copy of Proust buried during a firefight. As Saleh contemplates the human desire for meaning and how this informs a willingness for martyrdom, he is baffled by the irony of humankind’s propensity for repeating the same mistakes throughout history. A devastatingly profound catch-22 of modern conflict.
Read Full Review >>
See All Reviews >>
SIMILAR BOOKS
Coming Soon

The Last Karankawas
Kimberly Garza
Rave
What did you think of Out of Mesopotamia?
© LitHub | Privacy