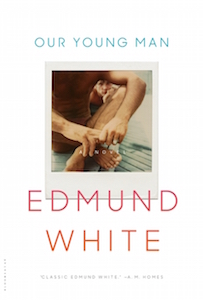 Our Young Man follows the life of a gorgeous Frenchman, Guy, as he goes from the industrial city of Clermont-Ferrand to the top of the modeling profession in New York City's fashion world, becoming the darling of Fire Island's gay community.

What The Reviewers Say
Rave Neel Mukherjee,
The Guardian
White writes of this world with great humour and knowingness and while he is clear-eyed about its absurdity, he never descends to savage satire. This open-heartedness, an essential White quality, makes his writing sparkle with generosity ... While so inexorably tethered to materiality, it is also a book that floats above things, so light is its touch, so playful and joyous its execution.
Read Full Review >>
Positive Michael Upchurch,
The New York Times Book Review
The book itself has a manic chanting rhythm as Guy keeps up the charade of being years younger than he is. Just when Our Young Man seems about to drown in its own superficiality — a heady mix of name-dropping, dieting strategies and drug binges — it becomes an oddly poignant contemplation of what it’s like to live 'way past' your shelf life and make choices that don’t quite match your insouciant appearance.
Read Full Review >>
Mixed Richard McCann,
The Washington Post
It’s in New York that White’s novel comes most alive, even if Guy remains indistinct to both himself and the reader ... But Our Young Man is not without its disappointments and failures. The novel’s sex scenes, for instance, too often recall those in Gordon Merrick’s overwrought 1970 gay novel, The Lord Won’t Mind, in which there’s quite a lot of what one might think of as men erotically brandishing their gleaming swords.
Read Full Review >>
See All Reviews >>
SIMILAR BOOKS
Coming Soon

A Trail of Crab Tracks
Patrice Nganang
Positive
What did you think of Our Young Man?
© LitHub | Privacy