Our Malady: Lessons in Liberty from a Hospital Diary 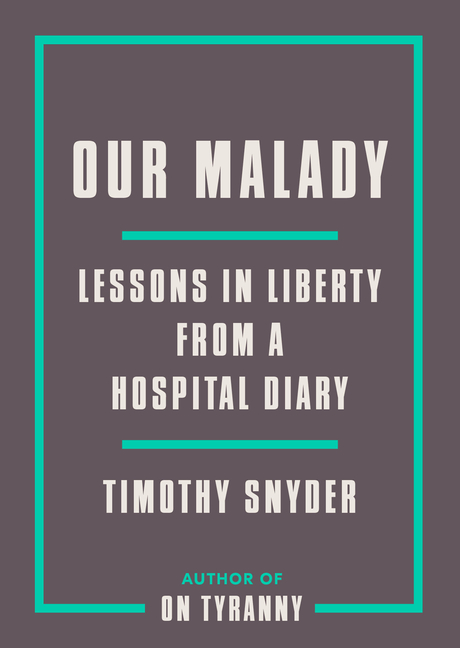 The author of On Tyranny takes on the U.S. medical system, comparing and contrasting his experiences with illness at home and abroad while arguing for healthcare as a human right

What The Reviewers Say
Rave Jonathan Kirsch,
Jewish Journal
What kept Snyder alive—and what makes Our Malady such a compelling book to read and ponder—is precisely the same potent emotion that Dylan Thomas conjured when he famously urged his father to 'rage against the dying of the light' in his single best-remembered poem ... Facts are the stock-in-trade of historians, if not politicians, and Snyder confronts us with hard data, much of it unexpected and unsettling ... Snyder is a relentless truth-teller ... On Tyranny was explicitly about the threat to freedom in America in the age of Donald Trump. Our Malady makes the argument that '[i]f our federal government and our commercial medicine make us unhealthy, they are making us unfree.' In that sense, these two books are companion volumes, and they call on us to wake up and pay attention before it is too late.
Read Full Review >>
Mixed Katie Hafner,
The Washington Post
Synder’s point about our right to health care—and the flaws of America’s health-care system—is not a new one ... There’s an initial thrill when reading Snyder’s take on American health care. He’s a brilliant historian ... Yet the unimpeachable authority that made statements in On Tyranny...feel chillingly real is missing in Our Malady. Snyder is clearly an authority in his discipline but not one on health care ... Snyder favors big political points: notions of liberty and freedom and how they connect to the imperative to create a health-care system that is equitable and just. However, in doing so, he mentions only in passing one of the main causes of physician burnout and distraction ... Still, there’s always a place for a good rant, and the American health-care system is perfectly rant-worthy, as it edges closer to extracting 20 percent of the nation’s gross domestic product, with mediocre outcomes to show for it. As rants from patients done wrong go, Snyder’s is loud and lucid. His litany of the many ways the United States bungled the coronavirus response is eloquent and pointed.
Read Full Review >>
Positive Karen Springen,
Booklist
Critics may take issue with whether a historian without a medical background is best qualified to argue for a single-payer healthcare policy, but he makes a compelling case for fixing a system that is so expensive that nearly half of Americans avoid medical treatment because they cannot afford it.
Read Full Review >>
See All Reviews >>
What did you think of Our Malady: Lessons in Liberty from a Hospital Diary?
© LitHub | Privacy