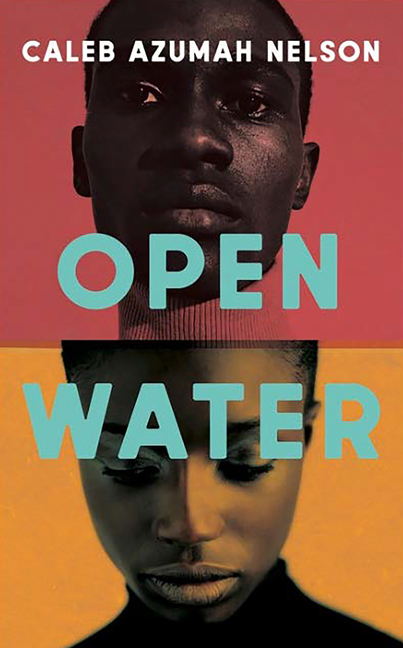 In a crowded London pub, two young people meet. Both are Black British, both won scholarships to private schools where they struggled to belong, both are now artists—he a photographer, she a dancer—and both are trying to make their mark in a world that by turns celebrates and rejects them. Tentatively, tenderly, they fall in love. But two people who seem destined to be together can still be torn apart by fear and violence, and over the course of a year they find their relationship tested by forces beyond their control.

What The Reviewers Say
Rave Michael Donkor,
The Guardian (UK)
It is Azumah Nelson’s expressive style that most startlingly reanimates this formula. His presentation of the narrative in sensual but precisely paced sentences with elegant refrains and motifs imbues Open Water with a rhythm of its own. Azumah Nelson’s descriptions of his lovers’ physicality provide the clearest examples of his supple prose. ... While an elegance of style is a hallmark of Azumah Nelson’s storytelling, there is bold risk-taking in his choices too: he writes in the second person, using its immediacy and potency to create an emotional intensity that replicates the emotional intensity with which the protagonist experiences his bond with the dancer and his wider world. ... In its interweaving of the romantic arc with meditations on blackness and black masculinity, this affecting novel makes us again consider the personal through a political lens; systematic racism necessarily politicises the everyday experiences of black people. ... Running alongside is a glorious celebration of the exuberance of blackness. The photographer stresses that he and his community are 'more than the sum of [their] traumas'. As the protagonist explores the influences underpinning his own work, and in tender dialogue between the lovers, Azumah Nelson namechecks black artistry of all kinds, often drawing attention to its immersive power and transcendental effect. ...Given its slim size, the novel sometimes seems slightly crowded – not just with these enthusiastic references to black artists, but in other ways too. Alongside the main narrative, other topics fleetingly referred to include the difficulties of being a black person in a private school, curling at the Winter Olympics, the Notting Hill Carnival, basketball, Kierkegaard, the loss of grandparents ... This engaging breadth of interest might make us wish the book, at 176 pages, were a little longer to accommodate its investigative spirit. However, this range and the desire to record the variety of a particular black perspective demonstrate a key feature of Azumah Nelson’s work: his exciting ambition.
Read Full Review >>
Rave Gabriel Bump,
New York Times Book Review
Family, grief, Blackness, Frank Ocean, hip-hop, dancing, growing up, breaking up, London, oppression, beef patties, basketball, diasporic trauma — for Caleb Azumah Nelson, it’s all water. The happy glide when it’s easy; the exhaustion of fighting against the current when it’s not. The threat of drowning always looming in the waves ... And in this unforgettable debut, Open Water, all streams are interconnected ... Azumah Nelson’s poetic brilliance, his ability to balance the general and the specific, the ambient and the granular, makes for a salient achievement ... But the big flouted convention, the big risk Azumah Nelson takes that doesn’t always quite pay off, is the second-person narration ... When Azumah Nelson finds his groove, however, we can forgive him all minor annoyances. Whether he’s describing a tense police encounter or lovers intertwined, when he’s great, which is often, his descriptive powers are truly special.
Read Full Review >>
Rave Shazia Hafiz Ramji,
Chicago Review of Books
Narrated in the second person, the 'you' of the novel embodies a self that is at once a detached observer and a self-reflexive voice shaping the narrator’s own story ... The gaze—that fleeting instant of exchange—weaves a significant undercurrent of belonging and alienation in the novel ... sophisticated and unapologetic in its telling of a relationship between a Black man and a Black woman who come to see each other in rare, uninhibited intimacy interrupted by the constant, ambient violence of microaggressions and police brutality ... Nelson’s voice is wholly contemporary and original, shifting between essayistic modes that weave Saidiya Hartman, Teju Cole, and Barry Jenkins’s Moonlight into the plot of the novel, adding to the chorus the likes of Dizzee Rascal and Kendrick Lamar to create a thunderous interdisciplinary lineage of uncompromising Black joy ... Through motif and repetition, Nelson creates a resonant aural narrative that is by turns lively and heartbreaking ... ultimately a novel that shows us how to move beyond a life of survival into a life that is lived—where one can be seen for who they are, even and especially when the personal is the political. It is a rare novel: a slow burner that is also a page-turner, reminding us that the erotic has always been about a richness of life.
Read Full Review >>
See All Reviews >>
SIMILAR BOOKS
Fiction