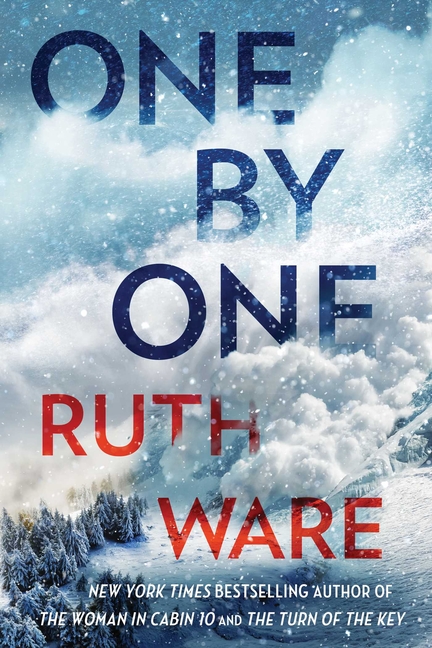 The bestselling author of The Turn of the Key and In a Dark Dark Wood returns with another thriller set on a snow-covered mountain. Getting snowed in at a luxurious, rustic ski chalet high in the French Alps doesn't sound like the worst problem in the world. Unless your company happens to be eight coworkers... each with something to gain, something to lose, and something to hide.

What The Reviewers Say
Rave Maureen Corrigan,
The Washington Post
... the most brazenly Christie-ish of all [Ware's] novels ... Ware’s story follows the snow tracks of Dame Agatha’s classic but cunningly swerves off-road at crucial moments with the aid of techie updates ... As in Christie’s mysteries, part of the great pleasure of reading One by One lies in rereading key passages and realizing how dim one was (as a reader) the first time round. Much of the crucial information is out in the open, right there on the page in dialogue and description, but Ware expertly scatters red herrings galore so that even the most alert reader becomes diverted into false deductions and dead ends ... Like Christie, Ware prefers to have her killings transpire 'offstage,' making One by One that increasingly rare literary achievement: a non-grisly thriller. The final section, where the last intended victim is locked in a ghastly battle of wits and endurance with the unmasked killer, has to be one of the most ingeniously extended plot climaxes in the suspense canon. I don’t know how Ruth Ware manages to keep up her pace of writing such fine and distinctive suspense novels every year (even Christie needed to take a break every so often); but, on behalf of suspense lovers everywhere, may I say that I’m grateful she has turned out to be a marathoner, rather than a sprinter.
Read Full Review >>
Positive Mary Cadden,
USA Today
Ware manages to make a retreat in a chalet in the wide-open French Alps feel claustrophobic, nerve-wracking and deadly ... The author’s choice of telling the story in dueling narratives enhances the steadily escalating pace of the book ... With one a member of the group and the other a casual observer, the reader is privy to more than just one character’s motives and observations. But when it comes to whodunits, giving too much away lessens the impact ... As always, Ware is effective at not just manipulating her characters, but also their environment, with a simplicity that belies its effectiveness. There are no outlandish scenarios or truly out-of-the-ordinary circumstances that render the plot unbelievable. Reader can picture themselves in a similar situation, and that adds to the suspense ... another solid thriller from Ware. And with all good thrillers, the crux comes down to the one thing we can never control: another person’s motives and intentions. And isn’t that the most frightening realization of all?
Read Full Review >>
Rave Jane Murphy,
Booklist
This one is especially timely, given that the terror of isolation is at its heart ... This is And Then There Were None rendered for the twenty-first century, and David Baldacci is spot-on in calling Ware 'The Agatha Christie of our generation' ... Ware is one of the hottest traditional-mystery writers at the moment, and her sure-to-be-heavily-marketed latest will only turn up the heat.
Read Full Review >>
See All Reviews >>
SIMILAR BOOKS
Fiction

A Will to Kill
Rv Raman
Positive
What did you think of One by One?
© LitHub | Privacy