On Freedom: Four Songs of Care and Constraint 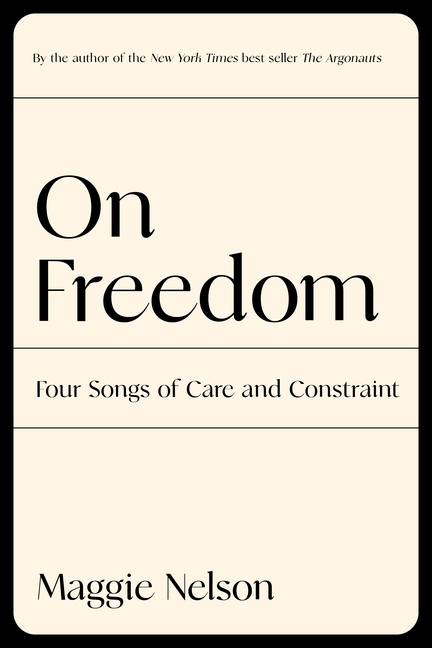 The author of The Argonauts interrogates the meanings of freedom. So often deployed as a jingoistic, even menacing, rallying cry, or limited by a focus on passing moments of liberation, the rhetoric of freedom both rouses and repels. Does it remain key to our autonomy, justice and well-being, or is freedom's long star turn coming to a close?

What The Reviewers Say
Rave Moyra Davey,
4Columns
... a sustained, uncompromisingly even-handed meditation ... Through twists and turns and idiosyncratic forays, Nelson pursues the ways in which care and constraint impact on any lived experience of freedom ... it is dense with references, analyses, provocations, and arguments in the style of her earlier scholarship in The Art of Cruelty: A Reckoning (2011). But it also contains the sympathetic, straight-talking, dare I say 'maternal' voice of Nelson’s best-selling auto-theory memoir, The Argonauts (2015) ... Nelson’s approach to understanding the conflicts, and what is at stake for artists and communities, is relentlessly dialectical, presenting multiple viewpoints and critiques ... Nelson has a vast capacity to embrace and 'hold' the contradictions of difficult art. This critical compassion is one of her great strengths ... Nelson is forthright and sanguine in her willingness to speak candidly about the missteps and blind spots of [the #MeToo] movement that simplistically admits only perpetrators and victims, and unwittingly erases complexity and ambiguity. Her research is profuse and rich ... Even though 'Drug Fugue' taxed me, as a reader, it had the paradoxical benefit of delivering an engrossing bibliography: I’ve had a long-standing interest in the literature of addiction, and Nelson’s chapter is a syllabus unto itself ... The final chapter, 'Riding the Blinds,' on climate change, is a gut punch and a wake-up call for anyone who needed it.
Read Full Review >>
Rave Kwame Anthony Appiah,
The New York Times Book Review
Maggie Nelson, in taking on this most American of topics in On Freedom, is always alert to the conceptual primacy of constraint, even as she allows herself no little freedom of her own ... Readers of her previous work will anticipate the engagingly idiosyncratic way in which she draws on all of her lives: as poet, theorist, critic, mother, spouse ... She pays careful attention to those with whom she disagrees, judiciously accepting some of their points while firmly rejecting others ... With patience and equipoise, she helps us parse those specificities ... Nelson displays the same eloquent equipoise when she ventures into recent debates about the ethics and politics of sex ... In discussion after discussion, Nelson shows the same alertness to context, intellectual modesty and the conviction that ethical goodness is never all on one side. She doesn’t aim to provide a positive account of the meaning of freedom. But if we understand freedom, above all, through our opposition to bondage, we can learn a great deal, as her book shows, from carefully cataloging and challenging the many ways of being unfree.
Read Full Review >>
Positive Alden Jones,
The Boston Globe
Nelson moves through knots of ideology on freedom via 'songs' of art, sex, drugs, and climate, drawing conclusions—some wild, some that readers might find regressive—that obliterate the binary of freedom vs. constrain ... Four cerebral essays comprise a text that the reader must stay with in order to allow any personal consensus on freedom to coalesce ... Nelson’s final 'song' on climate, 'Riding the Blinds,' gives On Freedom its clearest ring in terms of message ... Leaving off on this note clearly marks On Freedom as a rallying cry for constraint, the shadow of which then falls backwards over the previous chapters ... Nelson’s discussions of art and sex land with less finality, and in these chapters Nelson’s irritation with the current discourse is difficult to ignore ... I imagined her rolling her eyes every time she typed out a current talking point to prove she was caught up on the script before advancing her own more nuanced analysis ... Nelson makes a strong case for recalculating our positions on freedom with her own guiding principles ... These lessons are well received, but not until the third song, 'Drug Fugue,' did I recognize the joyous version of Maggie Nelson with her deliciously reckless-seeming record of thought ... On Freedom proves that Nelson continues to do us a great service as a critic, which is to herself digest, and sometimes wrestle with, copious amounts of literature and theory, some of which is infuriating to read (Paul Preciado, Jacques Derrida, et al.), and to integrate this material into a relatively short book, in an accessible, felicitous voice all Nelson’s own.
Read Full Review >>
See All Reviews >>
SIMILAR BOOKS
Criticism

Some of My Best Friends: Essays on Lip Service
Tajja Isen
Positive
What did you think of On Freedom: Four Songs of Care and Constraint?
© LitHub | Privacy