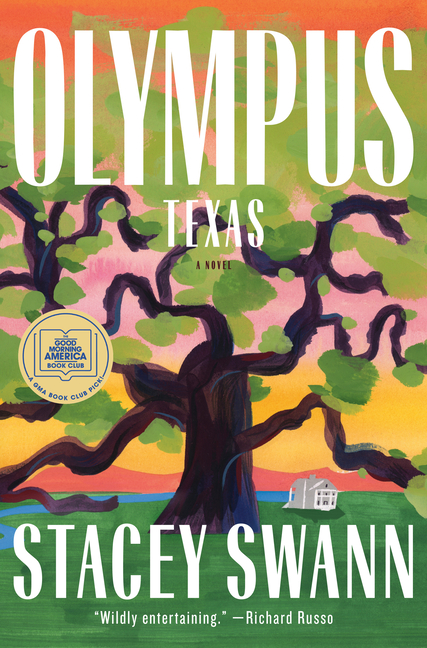 The Briscoe family is once again the talk of their small town when March returns to East Texas two years after he was caught having an affair with his brother's wife. His mother June hardly welcomes him back with open arms, and is no stranger to infidelity herself: she's tired of being the long-suffering wife thanks to her husband's many affairs. Within days of March's arrival, someone is dead, marriages are upended, and even the strongest of allies are divided.

What The Reviewers Say
Rave Michelle Newby Lancaster,
Lone Star Literary Life
Swann possesses a distinctive voice ... Olympus is fictional but only in the sense that you can’t locate it on a map. Everyone who grew up in or currently lives in small-town Texas (small-town anywhere) will recognize it viscerally ... Tucked inside the action of each day, interspersed between numbered chapters of present action, are origin stories (a Greek chorus, if you will)—of rage and broken hearts and mistakes and youthful promises impossible to keep—offering explanations for the now-fraught relationships that lend much to the richness of these characters ... Swann is skillful at foreshadowing unseemly mysteries, laugh-out-loud dialogue, and extracting maximum texture from analogies without being wordy ... feels a bit old fashioned and traditional, but then our foundational myths would be. This debut novel is a great combination of rollicking entertainment and timeless philosophical questions—a big, messy family saga about home and love and how we mere mortals fail each but try, try again.
Read Full Review >>
Positive Edan Lepucki,
The New York Times Book Review
It may be difficult for these characters to realize their flaws and tangled desires, but it sure is pleasurable to read about them ... Although the book takes place over just six days, occasional interludes provide rich portraits of a character’s history ... Over all, the mythological lens feels inoffensive but unnecessary; most of the time it made me wonder why more characters weren’t aware of the allusions ... Swann’s novel is most successful at its violent, surprising turning point. I won’t dare to give it away. I read without breathing — OK, maybe I gasped — and I experienced the characters’ grief and regret as if they were my own. However, once the narrative moved past this climactic event, it too often relied on confessional or confrontational dialogue to do its dramatic work. The town of Olympus faded into the background, and the story felt a bit inert ... Not that this kept me from turning its pages and finding pleasure in its revelations ... I could have stayed in this particular somewhere for a long while.
Read Full Review >>
Positive Jackie Thomas-Kennedy,
The Star Tribune
The Briscoe family traffics in loud, often incredible gestures; the reader senses that Swann is having great fun with some of the scenes, even when they are heartbreaking for the characters ... Swann never loses control of the myriad connections and betrayals among the Briscoes and their neighbors. The direct, confrontational nature of nearly all the dialogue is surprising ... Swann's interest in the process of forgiveness drives much of the story ... Shifting among the perspectives of many 'Olympians,' Swann writes an action-filled, devastating tale of homecoming.
Read Full Review >>
See All Reviews >>
SIMILAR BOOKS
Fiction

This Other Eden
Paul Harding
Rave
What did you think of Olympus, Texas?
© LitHub | Privacy