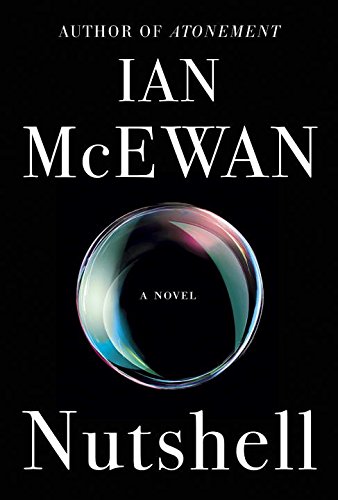 A tale of infedelity, deceit and murder, inspired by Hamlet and told from the unique perspective of a baby inside the womb of one of the plotting protagonists.

What The Reviewers Say
Rave Kate Clanchy,
The Guardian
[The fetus] sounds rather like Humbert Humbert in Nabokov’s Lolita; the same grand, elegiac tone; the same infinite knowledge of history and English poetry, the same covetous, obsessively physical eye ... McEwan makes the story over into a brutally effective howdunnit, magnificently strong on the details of murder ... a consciously late, deliberately elegiac, masterpiece, a calling together of everything McEwan has learned and knows about his art.
Read Full Review >>
Rave Michiko Kakutani,
The New York Times
...a smart, funny and utterly captivating novel ... Nutshell is a small tour de force that showcases all of Mr. McEwan’s narrative gifts of precision, authority and control, plus a new, Tom Stoppard-like delight in the sly gymnastics that words can be perform ... It’s preposterous, of course, that a fetus should be thinking such earthshaking thoughts, but Mr. McEwan writes here with such assurance and élan that the reader never for a moment questions his sleight of hand.
Read Full Review >>
Positive Annalisa Quinn,
NPR
...wit and self-awareness will go far in making improbable adaptations work. In Nutshell, we see a bookish mind at play. And it turns out that a fetal Hamlet — bound, watching the inevitable event grow nearer, an extravagant and erring sprit confined in doubts and impotence — is actually just about right ... Nutshell fails when McEwan turns earnest. I initially took the fetus's long monologues on world events as part of the larger joke, but it's clear after a while that some of them are sincere ... Nonetheless, Nutshell is a joy: unexpected, self-aware, and pleasantly dense with plays on Shakespeare.
Read Full Review >>
See All Reviews >>
SIMILAR BOOKS
Coming Soon

Our Country Friends
Gary Shteyngart
Positive
What did you think of Nutshell?
© LitHub | Privacy