Nothing Short of Dying: A Clyde Barr Novel 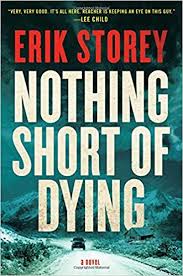 Newly sprung from three years in a Juárez prison, Clyde Barr answers an SOS call from his sister Jen, who is being held in the Colorado mountains by a big-time drug supplier.

What The Reviewers Say
Positive Marilyn Stasio,
The New York Times Book Review
After doing time in a Mexican prison, the tough-as-they-come hero of Erik Storey’s Nothing Short of Dying heads straight for the Utah wilderness to refresh himself before making a trek to the Yukon... So begins a sweaty thriller by a first-time novelist who really knows how to handle himself in these thickets ...Barr heads for the Colorado backcountry, where the plot really takes off. Storey knows and loves this rugged territory.
Read Full Review >>
Positive Crime Fiction Lover
... in Clyde Barr, Storey has come up with a lead character who displays many Jack Reacher traits ... this newbie novelist has the skill to add flesh to the bones and I soon found myself harbouring a grudging fondness for this former mercenary, ex-jailbird who has an endearing habit of helping out the underdog ... There’s more than a touch of the old fashioned Western about this book, where tough guys shoot first and ask questions later ... This is an interesting debut. There is a sense of familiarity that gave me pause, moments when I caught the shadow of plotlines and protagonists that have gone before, but there is definitely enough new ground here for a series to take root and I look forward to making Clyde Barr’s acquaintance again.
Read Full Review >>
Rave Crimespree Magazine
Erik Storey’s Nothing Short of Dying, however, pulls it off, and the author does so in a way that is even more impressive: with his debut. Rough men, violence, guns, shady pasts, a new love interest, and drugs are all classic elements that can be found in this narrative, but Storey uses them wisely inside a mold that is entirely his ... Storey writes secondary characters with the care and attention to detail that most authors save only for their protagonist ...manages to convey his love for wilderness without detracting from the narrative, and he does so with very readable prose that places the reader wherever the action is taking place ... his is one outstanding debut that should place Storey on many radars and that will have anyone who reads it eagerly awaiting for Barr’s next adventure.
Read Full Review >>
See All Reviews >>
SIMILAR BOOKS
Fiction

The Devil Takes You Home
Gabino Iglesias
Positive
What did you think of Nothing Short of Dying: A Clyde Barr Novel?
© LitHub | Privacy